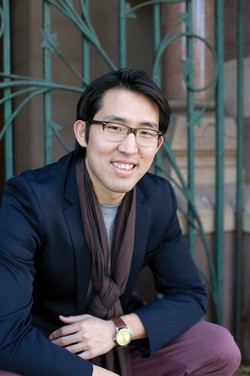 When he started at Princeton Theological Seminary, Yang thought he had his future ministry goals all figured out: he was going to serve a multicultural congregation or work with persons with disabilities. But thanks to the opportunity to focus on his studies afforded by the Presbyterian Study Grant, Yang has come to understand that ministry and calling is about much more than just picking an area of interest.

Yang’s ministry goals were shaped heavily by his background. He was born in Seoul, South Korea, and when he was three years old, his family moved to the United States, where his father found a position as a pastor of a small congregation.

It was a culturally dislocating move for Yang. “Because I grew up speaking Korean, I was probably more assimilated and familiar with Korean culture, and then all of a sudden we moved to the States,” he says. He eventually came to terms with the two sometimes opposing cultures, and today he identifies himself as both Korean and American, much like the church that raised him.

“Although the church identified itself as a Korean congregation, what’s really fascinating is that it was two churches in one sense because of language,” Yang says. His father led the Korean immigrant population of the church, but youth and children’s directors were always English speaking, and separate services were conducted in English. “It was really refreshing and interesting to see Christianity shaped by different cultural paradigms.”

Yang graduated from the University of Chicago in 2010 with a degree in political science and African American studies, and during his time there he forged strong relationships within an African American community, furthering broadening his cultural awareness.

Yang also has a sister with severe cognitive disabilities. After witnessing the poor treatment of people with disabilities in South Korea, he’s become an advocate for these persons and their families. So when he began to feel a calling to serve the church, clearly his path would lead to a multicultural ministry that would include an entire community, including people with disabilities, he thought.

“I feel called to the pastorate simply because I feel this is the best way I [can] participate in God’s mission to redeem and renew this world,” he says. He decided to continue his studies at Princeton Theological Seminary. “I feel like this is a place [that] hones compassionate pastors but also hones rigorous scholars, so it was the perfect marriage of scholarship and the pastorate.”

But at Princeton he’s learned that his calling and his future are not as cut-and-dried as he once thought. His understanding of what it means to be called has definitely changed.

“Calling is not boxed in within one’s profession. It’s simply to bear witness to the resurrection of Jesus Christ,” he says. So, while Yang still desires to serve in a multicultural context, to minister as a chaplain someday, and to work with people with cognitive disabilities, he is willing to chart a different course if need be. “I’m realizing in life that you just have no idea where God is going to lead you,” he says. “You just have to be open and say ‘God, here I am.’ ”

Yang says that the discernment process really begins by being honest with yourself about your gifts and how you can best participate in God’s mission. Next, your call should be affirmed and reaffirmed by the community of faith. Last, but certainly not least, comes the blessed and mysterious confirmation of the Holy Spirit. He credits the Presbyterian Study Grant with giving him the room to explore his pastoral potential and the freedom to engage more deeply in scholarship and serving the church.

“If I had to worry a lot about finances, then I wouldn’t have the freedom to really cultivate those areas in my life to this particular extent, so I am extremely grateful,” says Yang. “It shows the PC(USA)’s commitment, love, and support. It says, ‘We are one church, and we want you to know we are here for you and we are rooting for you and we’re doing this so that you can really serve the church in the best way possible.”

Daniel Yang is still passionate about his interest in a multicultural community, a place where people of different race, ethnicity, and class—and those with cognitive disabilities—are empowered within one space. But he also understands that following God’s call means going wherever God can put his gifts to best use.

“I want to pastor in a multicultural context,” he says, “but if God tells me to be somewhere else, then so be it. That will be my call. I will do whatever God calls me to do.”

Applications for the Presbyterian Study Grant are due June 15 for the 2013–2014 academic year. Visit the website on or after April 1 to download an application.

Toni Montgomery is a freelance writer in Statesville, North Carolina, where she is also secretary for First Presbyterian Church.