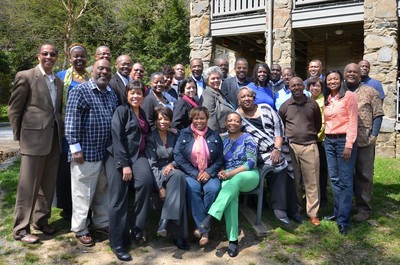 “Some of us have been looking forward to this day for years,” the Rev. Dr. Rhashell D. Hunter told those gathered for the opening session of the African American Mentoring Event on April 21. “To identify and equip African American women and men who might serve in the future as heads of staff or in executive leadership has long been a dream for many of us.”

The African American Mentoring Event—the fourth leadership institute offered by the Racial Ethnic & Women’s Ministries/Presbyterian Women (RE&WM/PW) ministry area of the Presbyterian Mission Agency—brought some 30 African American pastors and leaders from across the Presbyterian Church (U.S.A.) together at Montreat Conference Center from April 21 to 24. Its purpose—in addition to identifying and developing teaching elders with strong potential for future leadership in the church—is also to support African American congregations by resourcing them with a pool of strong candidates to serve healthy congregations.

One unique—and ongoing—feature of this latest leadership institute is its mentoring program. “We are excited that this event has a mentoring component,” said Hunter, who serves as director of RE&WM/PW. “This mentoring program will allow for relationships between mentors and mentees not only to form here but also to continue beyond the event, so that this is not an isolated, one-time experience without follow-up.”

Six face-to-face and check-in meetings have been scheduled for the mentors and their mentees over the next 14 months, concluding at the 221st General Assembly (2014) in Detroit, Michigan. Participants are also encouraged to be in communication with one another at times other than the designated check-in periods.

“The African American Mentoring Event created a process that will generate a pool of healthy and effective pastors who can provide transformational leadership for the development of healthy congregations,” said Lonnie Oliver, associate for African American Congregational Support in RE&WM/PW. “Mentors and mentees will also share experiences and learning that will help congregations impact their surrounding communities. In other words, this event has the potential to impact the world with persons who love the Lord Jesus Christ.”

In addition to relationship building, Hunter added that the event was also designed to develop skills in areas that aren’t generally covered in seminary, such as managing large staff organizations, understanding multimillion-dollar budgets, employment and legal issues, interviewing skills, and human-resources policies.

“Knowledge and wisdom in the form of people are essential for head of staff and executive leadership roles,” she said.

A conversation with executive leaders and heads of staff in the PC(USA), held on the evening of April 22, offered one such opportunity to hear the experiences of those already serving in administrative, executive, or head-of-staff ministry positions, including Linda Valentine, executive director of the Presbyterian Mission Agency.

“Mentoring events like this are so important because we need strong leadership for the church,” said Valentine, noting that the Presbyterian Mission Agency has six directional goals (or programmatic emphases), the first of which is to cultivate, nurture, and sustain diverse, transformational leaders for the church.

“Often when I go around the church and I describe our plan, our work, and our activities, when I cite transformational leaders as the first of our goals,” Valentine continued, “people will just say, ‘Well, stop there. If you get leadership right, the rest of it will just fall into place.’”

“Relationships are being forged here with the intention of sustaining them in a way that will help you to continue to enhance your skills, so that you will be ready to assume leadership roles in our congregations, mid councils, and agencies of the church,” Patton told the gathering. “As you begin to discern how God might be calling you to serve the church, the church will continue to be blessed with your strong leadership.” 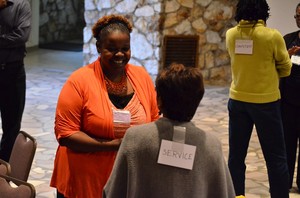 Aisha Brooks-Lytle participates in a "getting to know you" exercise.

One event participant—the Rev. Alice Ridgill, organizing pastor for The New Faith Presbyterian Church new church development in Greenwood, South Carolina—said that she considered the four days spent at the event to be a good investment of her time. “Our church is a connectional church, and I believe in using those connections to sharpen the skills that I have,” she said. “Being among all of this wisdom is a wonderful thing for a young pastor.”

Agreeing with Ridgill that making connections is vital, Hunter emphasized the importance of networking, especially during the social gatherings that were scheduled throughout the event. She also urged participants to decompress by taking advantage of the natural beauty of Montreat, a partner both in the planning and hosting of the event. “We moved you away from your churches so that you wouldn’t have to open the door for anyone,” Hunter said. “Take the time while you are here to relax, to renew, to refresh.”

A host of diverse and powerful worship experiences also allowed for participants to be renewed as well as challenged. Preachers for the event were Sterling Morse, Carolyn Heyward, Robert Burkins Sr., Rhashell Hunter, Diane Givens Moffett, and Jerry Cannon.

In a Facebook post following the event, the Rev. Byron Wade, pastor of the Davie Street Presbyterian Church in Raleigh, North Carolina, and vice moderator of the 218th General Assembly (2008), wrote: “Just returned home from Montreat Conference Center, where I had a wonderful time the last three days at the PC(USA)'s African American Mentoring Event. I learned a lot of information that will serve me well in my ministry at church. I've been assigned a great mentor and enjoyed the fellowship of PC(USA) staff and fellow colleagues in ministry as we shared our frustrations, hopes, and dreams. Most of all, ‘we didn't go to church, we had church!’ If you've heard preachers like Diane Givens Moffett, Robert Burkins, Jerry Cannon, Sterling Morse, and Rhashell Hunter, you'd know what I'm talking about. Yeah, we had church!”

In his sermon on the event’s opening night entitled “Extending the Legacy”—based on Genesis 26:12–18—Sterling Morse used the example of Isaac to illustrate his two main points. First, that wherever God leads, God will provide, and second, that legacy is important.

After Isaac and his family had left Gerar—where they had moved due to famine—God directed them back to the familiar landscape of Isaac’s youth. In the valley, Isaac began to dig again the old wells of his father Abraham that had been closed by the Philistines.

“These were the waters that would allow him to take the legacy the next mile of the way,” Morse preached. “If Isaac had not observed the spiritual and vocational skills of his predecessor, the legacy would have been lost.”

Morse said that, in today’s church, many leaders are frustrated, asking why the black Presbyterian church is in jeopardy. “The churches are like wells that have been intentionally stopped up,” he said. “They are in need of someone who loves God so much and who knows where the old wells are found. Someone born with a preloaded GPS system, who can see the great needs of the present and also see the future.” 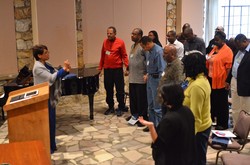 Preaching the following morning (April 22) on Acts 9:1–20, the conversion of Saul, Carolyn Heyward said: “If we are going to build this 21st-century church—if this church is going to grow by 10 or 20 or 30 percent—we must let the light of Jesus shine in the dark places, those secret places in our hearts. We’re going to have to hear the voice of God giving us new models that this 21st century can hear and understand. If we will see the light and hear the voice, God has already given us the increase. To build the African American community, the struggles that we have had will be gone by the wayside, because God will give the increase. Old men and women will come, and the church will grow.”

The Rev. Betty Griffin, pastor of the First Presbyterian Church in Mount Vernon, New York, a participant in the event, marveled that she had grown from mentee to mentor in three short years, having benefited from a previous RE&WM/PW conference, the Racial Ethnic Clergywomen’s Leadership Institute.