The greatest story ever (re)told

Fresh approaches to e-vangelism in the digital age 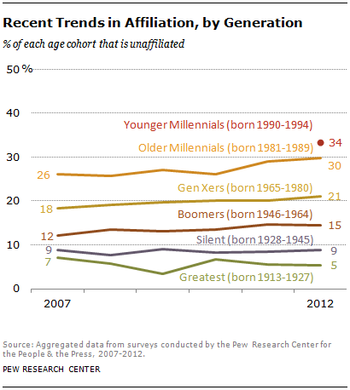 In today’s digital world, answers to almost all of our burning questions, whether they are about the burning bush or Moses’ tablets, are instantly available at our fingertips. But for Christians, especially denominational leaders, one question persists as it has for millennia: “How best do we spread the Word of God?”

It’s always been a tall order for those spreading the Word. Nothing sarcastically says “good career move” better than being fed to hungry lions, being met by angry mobs or being burned at the stake by hysterical zealots crying “blasphemer!” for being both a proselytizer and a heretic.

Today, times are a bit calmer, but it can still be frustrating reaching the plugged-in and highly distracted generation known as “Millennials” — those born since 1980. It’s an even taller order with their children, the so-called “Generation Z” or “Generation Next.”

A recent Pew Research study underscores this dilemma. Released in October 2012, the study shows the substantial growth of a group dubbed “the Nones,” who consider themselves “spiritual” yet remain non-aligned with any particular denomination. One out every five people is a None. Millennials, at 34 percent, make up the largest subset of Nones; by contrast, only 15 percent of their parents — primarily Baby Boomers — do so.

At first blush this research might be enough to make a saint cry, but not a pair of Presbyterian elders: Patty Chapman on the East Coast and former GA Moderator Bruce Reyes-Chow on the West Coast. Both have taken up the gauntlet of spreading “the greatest story ever told” with two different approaches. Reyes-Chow is part of a covenant group led by noted theologian and scholar Hal Taussig, which produced A New New Testament, Chapman through her “Bibleizing” and entrepreneurial skills to produce A Place for Everyone placemat curriculum for Sunday schools.

Anecdotal evidence indicates that Nones, especially Millennials, are not averse to exploring religious or spiritually themed materials. They might first reach for The Lord of the Rings and C.S. Lewis’ writings because of the adventure stories, but Millennials will often stay for the intertwined morality plays and introspective spirituality.

Nones are also exploring a series of ancient texts discovered in Egypt during the past 120 years. Among them are 52 early Christian documents that surfaced at the end of World War II. Known as the Gnostic Gospels of the Nag Hammadi collection, the texts were made more approachable through novels like The Da Vinci Code.

Taussig, co-pastor at Philadelphia’s Chestnut Hill United Church and a visiting professor of theology at New York’s Union Theological Seminary, invited Reyes-Chow and 17 others to join forces with him in New Orleans during February 2012. Together as a council they would study and discuss these texts with an eye to incorporating some them into what ultimately became A New New Testament.

The (more complete) Word of God

Until the writings of Matthew, Mark, Luke, John, Paul and the rest were codified as the New Testament’s canon some 300 years after His resurrection, people heard the story of Jesus told through additional eyes and voices. These Gnostic Gospels are attributed to, among others, Mary Magdalene, Thomas (he of “Doubting Thomas” fame) and even Judas.

The discovery of the Gnostic Gospels in Egypt rekindled debate among theologians and religious scholars about what a “proper” New Testament should contain. One think tank that emerged was the 150-member Jesus Seminar founded by Robert Funk. During his lifetime, Funk advocated for a volume along the lines of what was produced by Taussig’s council; Funk also lobbied strongly for the extraction of some books in the New Testament, among them the Gospel of John.

Two of Taussig’s Jesus Seminar colleagues — John Dominic Crossan and Karen King — joined his council for A New New Testament. This move aroused some criticism, including critics who wondered what authority the council members had to re-write God’s Word.

Recently Taussig and Reyes-Chow were guests on KQED-FM, where Taussig allayed some fears. While not whole-heartedly endorsing the Jesus Seminar’s efforts, Taussig stressed that, “Every one of the traditional New Testament works is (contained) in A New New Testament.”

His reasoning was simple: during the six months of preparations and conversations ahead of the council’s gathering, Taussig saw no need to cut anything.

“It was not the spiritual needs and spiritual interests that I was picking up across the country that people need things thrown out,” he said.

Rather, he found “a real need for people to be reading these spiritually very powerful documents that had been recently discovered within the last 100 years alongside of the traditional works.”

Along this line, Reyes-Chow was quick to point out that, with the Gnostic Gospels and other “new texts” heavily favoring the strong role women played in the early church, he didn’t pick up any sense of the New Orleans council attempting to be “politically correct” or compensating for the “male-dominated” approach of the current canon.

Through the collaborative sweat and tears and prayers of the 19 members, these 10 texts were incorporated into A New New Testament: The Gospel of Thomas, The Gospel of Mary (Magdalene,) The Gospel of Truth (which leads the new volume), The Thunder: Perfect Mind, The Odes of Solomon I, II, III and IV, The Prayer of Thanksgiving, The Prayer of the Apostle Paul, The Acts of Paul and Thecla, The Letter of Peter to Philip and The Secret Revelation of John.

Keying on people’s need for real-world “nourishment” from their religious study and reflection, Taussig paid particular attention in selecting the council’s members so that it was not overloaded with academics but was balanced among those working with congregations.

Taussig explained for the Presbyterian News Service that he also looked for a demographic balance among his council membership of bishops, authors, rabbis, ministers and scholars: with the “Gen X” Reyes-Chow, now age 44, “…six of the 19 that are his age or younger. Three or four others are in their late 40s or 50s. Six or seven are in their 60s. Two are in their 70s. So although the council was quite a bit younger than much of the national leadership of other American religious bodies, it is almost half in the Baby Boomer generation and a couple older. Since we were going for people who had national experience in giving spiritual advice, this probably is the major reason for the council’s somewhat advanced age.”

The authors hope the 10 Gnostic works, along with the current canon, will pique the reader’s curiosity enough to come to Christ’s table; once there, they might very well find Chapman’s unique treatment for furthering the storytelling.

Setting a place(mat) at the Lord’s Table

Patty Chapman, a new product/branding consultant and marketing designer who serves Scarborough (N.Y.) Presbyterian Church as director of Christian Education, is a young-at-heart Boomer with two grown Millennials of her own.

Chapman is effervescent about the Bible. During a recent interview with the Presbyterian News Service, she explained that it’s those at the younger end of the age scale that are the focus of her re-presentation of Bible stories through A Place for Everyone placemat curriculum for Sunday schools.

“Imagine a book that has basically stayed the same for centuries, gives you something different every time you read it (even the same passage over time and life changes) and inspired so many wonderful things? I’m always amazed at it! The Eighth Wonder of the World — it definitely should have been on that list, don’t you think?”

She calls her practice of discerning and connecting biblical themes found in non-religious works “Bibleizing.”

While in college, she discovered C.S Lewis, his Narnia series and the biblical influences within. Chapman began making a note every time she encountered a biblical reference in modern literature, the movies, TV and music. She recently published a biblical study guide to use with The Hunger Games and has one on the Narnia series in the pipeline.

Chapman’s interest in the Bible led her to care more deeply about social justice issues, which led to a national leadership position. Following the action of the 217th General Assembly (2006), Chapman was appointed a member of the PC(USA) and National Council of Churches task force to develop A Social Creed for the 21st Century.

But it’s far from all work and no play for Chapman: there’s a soft spot in her heart for those kitschy restaurant paper placemats. Less frequent in today’s world of drive-through burger joints, these 11” x 17” placemats once graced the tables of seemingly every eatery. Almost always chock full of fun facts about the U.S. presidents to the story of the Chinese zodiac to puzzles & games, these placemats frequently doubled as the kid’s menu.

About 10 years ago, Chapman began working with children as parts of Scarborough’s summer reading program. She went through the Narnia series, handing out Bible verses and asking the young readers to show how the verse was relatable to Lewis’ writings. The interaction and feedback struck such a positive chord that Chapman began tinkering and developing a concept that emerged as the placemat format.

For “relatability and ease of interactivity,” she designed each placemat with the familiar look of a webpage. A passage from that week’s lectionary anchors each page. From there, each child is free to pursue the several activities surrounding the passage. The menu activities range from the game “goat-goat-sheep” as a way of introducing what a shepherd is to suggested “Bibleized” movie clips and/or references in a favorite book, such as one by Dr. Seuss.

“(Chapman’s) placemat curriculum has struck a chord — particularly with our smaller congregations. The intersection of scripture and contemporary culture has captured the imaginations of many children and youth in our part of God's kingdom,” says the Rev. Susan Andrews, Hudson Rivers’ general presbyter.

In the same way that Reyes-Chow sees A New New Testament as “amplifying, enhancing and expanding” one’s experience with the Word of God, Chapman sees A Place for Everyone placemat curriculum as an adjunct to — rather than a replacement for — any other Sunday school curriculum. Finding Bible references in everyday life helps continue the Sunday school experience during the other six days of the week.

Adds Chapman, “To me, the Bible is … the key to connecting spirituality and religion. I am bound and determined that we don't lose our knowledge of it and its place in our culture!”

Jim Nedelka is a ruling elder at Jan Hus Presbyterian Church and Neighborhood House in New York, where he works for a major broadcast network. He is a frequent contributor to the Presbyterian News Service.