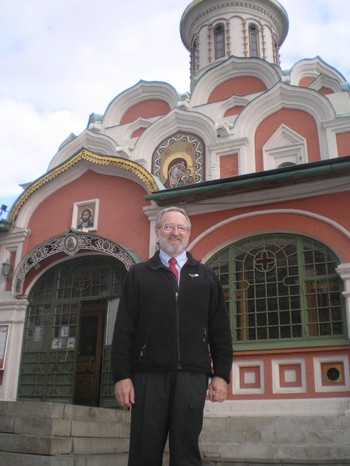 Gary Payton’s fascination with “all things Russian” was ignited by the space race between the Soviet Union and United States when he was a boy. He wrote a paper in fifth grade about astronauts and cosmonauts (as the Russians call their space travelers) and in junior high school wrote a prescient paper about the possibility of Soviet and U.S. astronauts traveling in space together.

At age 13, Payton ― who retired at the end of March after 14 years as the Presbyterian Church (U.S.A.)’s regional liaison for Russia, Belarus, Ukraine, Armenia and Poland ― began studying Russian.

But it was not until 1999 ― at the age of 49 ― “that I put my foot down in Red Square for the first time, realizing a life-long dream,” Payton told the Presbyterian News Service in a June 20 interview.

Payton never veered from his intense interest in Russia. He continued studying Russian through high school and majored in Soviet Studies and International Relations at the United States Air Force Academy. Following his graduation in 1972, he embarked on a 24-year career in the Air Force “monitoring, analyzing and reporting on the strength of the Soviet military in the midst of the Cold War.”

Then came a conversion experience.

“Near the end of my Air Force career, I attended a peacemaking seminar at Ghost Ranch,” he said, “and my eyes were opened to the way in which the PC(USA) was engaged internationally.”

Shortly thereafter ― still in uniform but on the verge of retirement ― he applied for and was chosen as director of the Presbyterian Peacemaking Program. Given his background, the choice raised more than a few eyebrows in Presbyterian circles.

Three years later, in 1999, the position as regional liaison opened up, and Payton’s dream of finally setting foot on Russian soil was realized.

“During the Cold War both sides viewed the other as the enemy,” he said. “Our interpretations of each other were caricatures, but working in partnership with renewing Christian churches in Russia I gained a deep appreciation for what we share as people of faith … to care for our families and our desire to care ‘for the least of these.’

“At a deeply spiritual level,” Payton said, “Presbyterian World Mission gave me the possibility to use the skills ― language, history, politics, geography ― developed for purposes of war now for purposes of peace and reconciliation. I received the gift of being able to come alongside churches renewing themselves after decades of persecution under the communist system. That has been the real joy for me and my colleagues.”

That took unlearning much of what Payton had learned in his Air Force career. “I had to stop focusing on Kremlin policies and pronouncements and open myself up to listening to the aspirations of Christian believers as they hoped for a better future,” he said. “I had to become more sensitized to average citizens rather than the high politics of nation states.”

The PC(USA)’s principal partners in Russia are the Russian Orthodox Church (ROC), the Baptists and the Lutherans.

The Russian Orthodox Church ― the state church of the country since 988 AD ― “has renewed itself vigorously,” Payton said, by rebuilding parishes, re-establishing monasteries and undertaking social ministries. “Where invited,” Payton said, noting the tricky nature of the relationship, “we’ve come alongside the ROC in a wide variety of ministries of compassion, such as HIV education and prevention, disaster response, domestic violence prevention resources, earth care and special needs children and their families.”

The ROC “continues to be faced by mighty challenges such as secularization, the legacy of state-sponsored atheism and the moral and spiritual drift associated with the breakup of the Soviet Union,” Payton said.

Russian Baptists have renewed themselves as well, Payton said, through church-planting, extensive social ministry and vibrant youth activities, “but they remain a distinct minority and often feel repressed by the Orthodox majority.”

The centerpiece of PC(USA) engagement with Russia’s churches in general and with Baptists in particular is the congregational twinning program. “Twinning (of Russian and PC(USA) congregations one-to-one) creates the opportunity for a spiritual journey together and for Presbyterians to come alongside some Russian Baptist ministries, such as summer camps, orphanage outreach and post-orphanage care,” Payton said.

Russian Lutherans find themselves in a difficult spot, Payton said. “Our Lutheran partner has centuries-old roots in Russia but with their German heritage and the violent legacy of World War II, they struggle. The irony is that in Russia they are viewed as Germans and in Germany they are considered Russians.”

Historically, the PC(USA) has been most active in teaching ministry with Russian Lutherans, sending professors to the theological seminary in St. Petersburg. That seminary is currently on hiatus as it explores distance learning and other options for theological education, “so we’re now exploring congregational twinning opportunities with Russian Lutherans,” Payton said.

“We have had eight annual gatherings bringing together PC(USA) and Russian partners, with active participation by Baptist and Orthodox  clergy and church members adding to the dynamism and excitement,” Payton said.

The next gathering is October 3-5 and is hosted by First Presbyterian Church of Fayetteville, N.C.

The oldest expression of PC(USA) mission engagement in Russia is the Moscow Protestant Chaplaincy (MPC), an English-language, multi-denominational ministry co-founded in 1962 by five denominations, including the PC(USA). “For all that time, MPC has provided deeply meaningful worship for students, refugees, diplomats and business people,” Payton said.

“It also provides dynamic outreach ministries for those in need, such as a soup kitchen for retirees, a medical clinic, refugee ministries, a computer center, ministry to bi-racial (African-Russian) kids and families and anti-racism, anti-racial-violence programs.”

“It’s always easier to raise support for MPC when one of ‘ours’ is the pastor,” Payton said.  “Faced with financial constraints and strategic refocusing, I hope and pray that the PC(USA) will again participate in the MPC pastoral call process for 2015.”

Though the PC(USA)’s “manner of mission engagement with partner churches in the former Soviet Union has changed over time,” Payton said, the goal has remained constant: “We remain dedicated to hearing God’s call and finding ways to accompany our brothers and sisters as their churches continue to renew themselves.”

After 14 years as the PC(USA)’s point person in Russia, what will Payton miss most?

“Russia’s on the other side of the world,” he said. “I’m going to deeply miss the opportunities to be with friends and the shared spiritual journey I’ve had with friends and mission colleagues. I long to maintain spiritual connection with those with whom I’ve journeyed.”

Payton’s Russian journey has indeed been remarkable. From Cold War terror to dreams of joint space flight, from military intelligence to Presbyterian mission service. But at the end of the day, for him, it’s been a journey of faith.

“This is a story of a guy who by circumstance and opportunity became an expert in things Russian and was blessed to be able to share this expertise with others so they could appreciate those of another culture,” he said.

“We used to be scared to death. Now we can be friends despite still standing in the shadow of the Cold War and we can journey together into the daylight that is still coming on.”