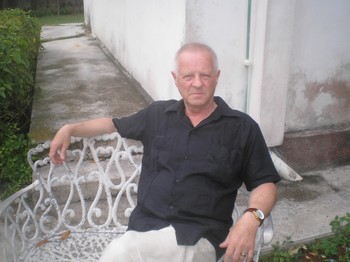 “This was the heyday of liberation theology and theology in Europe and the Netherlands was kind of boring,” the Biblical scholar and professor at the Free University of Amsterdam told the Presbyterian News Service in an interview on the campus of the Evangelical Seminary of Theology here after teaching and lecturing for a week. “Then there was a vacancy so I applied and became immersed in contextual theology.”

de Wit accepted a teaching position at an ecumenical seminary in Chile and taught there for 10 years, all during the brutal regime of Augusto Pinochet. “It was a very dark time politically,” he said, “but very rich theologically because the enemy was right there and the biblical context ― the prophets, the pharaoh, the Romans ― was so alive.”

After his tenure in Chile, de Wit returned to the Free University and began to collect empirical data on the effect on people of reading the Bible. “There is this awkward assumption, or pretension even,” he said, “that reading the Bible has some effect, but there is hardly any scientific, empirical information on how that works ― the relationship between reading and acting.”

In the late 1990s, de Wit and colleagues on the Free University’s faculty of theology launched a project entitled “Through the Eyes of Another.” It began with several international conferences in Amsterdam, introducing and refining de Wit’s methodology for the project.

“It is an open way of reading the Bible,” he explained. “Our initial question was: ‘What happens when two groups from radically different contexts read the same biblical text, first by themselves and then in dialogue with each other, about its significance?’”

de Wit selected John 4 ― the story of Jesus encounter with the Samaritan woman at the well ― and submitted it to 130 small groups of readers in more than 30 countries around the world, including six here in Cuba. Each group was asked to submit its responses, which were translated and compiled by de Wit into a “reading report.”

“As the responses came in we had a kairos moment,” he said, “because we received insights that in all our years of Bible study we had never heard before.” One of the most beautiful readings of the text, de Wit added, came from a group of Hindu transsexuals in India “who certainly understand the cultural rejection of the Samaritan woman by the Jews.”

The next stage of de Wit’s project linked groups with each other. “They had to read the report from the other group and then reread the text through the eyes of the other group,” he said. “This stirred up a lot of reaction, some in the form of shock, with some groups accusing the other of ‘demolishing’ the text.”

de Wit’s group was paired with a group of South African Pentecostal bishops “who were very mad at us because they have a very high Christology and could only read the text as God, but not Jesus, redeeming the Samaritan woman.”

But mainly, de Wit continued, “People started to get right into how culture impacts the Bible – both in the biblical context itself and in our reading of it in our own contexts. The biggest eye-opener for me was number and complexity of cultural ‘codes’ that are needed and uncovered to unlock the Bible for people.”

For instance, he said, Dalit (“untouchables”) Christians in India “quickly saw in the text that Jesus came to the Samaritan woman without even a jar, so not only was he asking for water but for her to give him a jar, which was by definition ‘impure.’ This act breaks the entire cultural border between Jews and Samaritans, but a person not living in a purity/impurity situation will never fully crack this code.”

Some of the paired groups bonded so significantly during the process that they arranged to meet face-to-face. “Like all intercultural efforts you have to invest very much,” de Wit said. “But if you do it is wonderful to see how a simple text is able to lift you up above radical differences and to realize that you alone are not able to grasp the full meaning of the text. The Bible is always more than you are.”

The “Samaritan woman” project concluded in 2004. A second group of studies ― on the rape of Tamar in 2 Samuel 13 and the story of Mary at the tomb from John 20 ― just concluded in February of this year.

“We want to transform these readings of Scripture into a script for reconciliation and peace,” he said. “Where are the traces of real transformation and how does transformation happen?”

More information about the “Bible and Transformation” project is available at www.bible4all.org.