Home News Paying Attention to the Needs around Us

Paying Attention to the Needs around Us 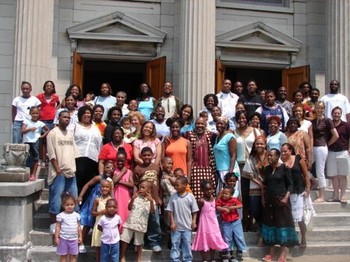 Village Building Church and Congregation is an example of a growing African American congregation. —Rev. A. Stevenson

Supporting racial ethnic, multicultural and new immigrant church growth doesn’t come down to one or two groups – but it’s a charge for the whole church.

“What’s needed to open the church to everyone is to get to a different sort of critical mass - where the racial ethnic groups come together and have more leverage moving toward the same goal,” David W. McKee, Executive & Stated Clerk, Synod of the Mid-Atlantic, said after attending the Racial Ethnic, Multicultural, and New Immigrant Church Growth Consultation. “It’s time for the dominant (majority white) group to let this change happen, to let all people take part and have a voice. We need a genuine opening up to all groups.”

Those attending the consultation came up with some immediate strategies to connect with and grow racial ethnic, multicultural, and new immigrant groups.

“This consultation sought to change a historical dynamic in the church by intentionally involving leaders from every level of PC(USA),”Rev. Sterling Morse, Coordinator for Cross Cultural Ministries and Congregational Support and lead staff to the Racial Ethnic, Multicultural, and New Immigrant Consultation, told us. “The hope is the understanding that growing the church is not relegated to merely specific areas or groups but for all of us.”

Responding to the directive from the 220th General Assembly (2012) to develop strategies and policies to foster racial ethnic, multicultural, and new immigrant church growth within PC(USA), Racial Ethnic & Women’s Ministries/PW’s staff hosted a consultation in the summer of 2013 to address what can be done.

“There was an intentional collaboration between representatives of the GA offices, the mid-council executives who participated, and congregational leadership, especially young adults who provided great leadership and voice.” Rev. Dr. Rhashell Hunter, Director of Racial Ethnic & Women’s Ministries/PW said.  “We were looking for practical strategies that will lead to ministries of impact in our church.”

“I was impressed by the group that gathered and the enthusiasm I heard from them after they had been meeting for a full day. We started the day asking "what will be different this time?" Linda Valentine, Executive Director, Presbyterian Mission Agency, said.

The group of about three dozen people worked over two days identifying both the bright spots within racial ethnic, multicultural, and new immigrant ministries as well as the challenges still to be met.

Some of the obstacles include the dismissal of leadership credentials of new immigrant pastors ordained in Presbyterian Church denominations outside of the United States; and the need for support and training; and local and regional human resources in areas where mid-councils have experienced staff reduction.

“What did stand out was the shared thought that training received by Presbyterians in Presbyterian-related seminaries seems unaligned with present day pastoral and congregational needs,” Rev. Morse said.

Those would include working with seminaries to develop culturally sensitive processes for curriculum, theologies, language, and teaching and learning styles for both clergy and lay leaders of all ethnicities.  Attendees also identified a need to transform the culture of the Presbyterian Church (U.S.A.) from regulatory to relational.

“We need to move away from our high level of care and feeding the growth of the institution and pay more attention to the needs of the world around us,” McKee said.  “We’ve often thought that the flow needs to be from the world around us to the church, but we need to flow outward to help the people around us.”

“The context for ministry is ever changing and the church is in need of leaders…who are committed to helping it live out its call to be a more inclusive body of Christ that understands and embraces the beauty and greatness that diversity brings,” Vince Patton, Racial Ethnic Leadership Development Manager, said.

What's Next
The writing team for the consultation began preparing its report of recommendations in July 2013 for the 221st General Assembly (2014) which will take place in Detroit, Michigan.

Learn more about our  Multicultural Congregational Support and New Immigrant and Emerging Ministries Offices. Both are part of Racial Ethnic & Women's Ministries/PW.

For Rev. Morse, the discussion and worship taking place at the consultation itself was a sign of forward momentum.

“The diverse group gelled quickly, spoke frankly in dealing with difficult subjects, and reach common ground in decision making in a way that seldom happens, at least in my experience,” he said. “I contend the consultation, the collaboration on faith and mission issues with others, across race, culture, and class, allowed for the sense of healing all.”