Home News Clear as a bell

Clear as a bell 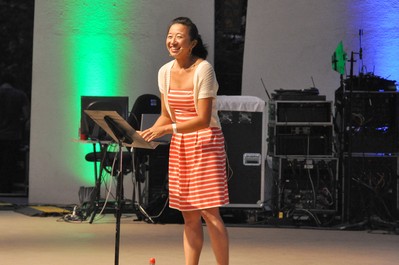 Teresa Cho preaches to 5,000 at Presbyterian Youth Triennium about the feeding of the 5,000 —David Young

The Rev. Teresa Cho, pastor of St. John’s Presbyterian Church in San Francisco, hated her middle name as a child.

“Eungyong literally means ‘silver bells’ and I thought, ‘Oh great, another thing to be teased about at school ― Teresa Silver Bells Cho,’” she told 5,300 youth and their leaders at a July 18 outdoor worship service at the 2013 Presbyterian  Youth Triennium on the campus of Purdue University here.

Then her father told her that that the Chinese character for “silver” also means “clear” or “mirror image” and the character for “bells” also means the sound or peal of a bell. In that light, Cho said she saw the meaning of her name as “telling the truth as clearly as possible” and she thought, “That’s good. I can do that ― as I live out God’s call in my life and continue to discern God’s call, I strive to communicate the truth of Jesus Christ to the world.”

But what is the truth of Jesus Christ? she asked the hillside throng. Preaching from John 6:32-40 ― the story of Jesus feeding the multitude ― Cho said, “Jesus is surrounded by a crowd much like this and they’re all hungry for something, something they can’t quite grasp yet, but they are drawn to him.”

In this point in John’s gospel Jesus has not yet revealed himself as the Messiah, Cho said, “but they are nevertheless drawn by their desire to know who Jesus is, with no thought to where their next meal would be and where they would sleep.”

“Have you ever wanted to know something so bad that you were willing to wait, save up or sacrifice for it? Promised to never ask for another thing for it?” Cho asked her makeshift congregation. “What did they think Jesus had to offer that they would sacrifice their basic needs for it?”

Miracles were what first attracted people to Jesus, Cho said, “but were just a clue to who Jesus really is.” Only in John’s gospel do we learn where the loaves a fishes came from ― a youth, she continued. “We don’t know much about the boy, but the details are inconsequential to how Jesus is able to use him.”

Jesus told that throng, Cho said, “I am the bread of life that will never make you hungry again,” referencing the Triennium theme, “I AM.” And in the act of sharing the bread of life, worshipers learn more about their shared humanity in Christ.

“Look around at those near you,” she urged her young congregation. “You are a collective vision of who you are because Jesus always reveals himself in community. You are a child of God AND the body of Christ.” 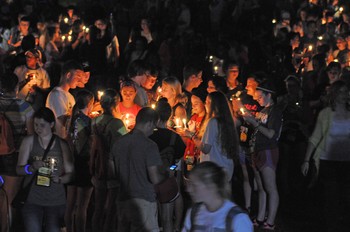 Introducing the Lord’s Table ― Cho presided over communion with Presbyterian Church (U.S.A.) General Assembly Stated Clerk Gradye Parsons ― she recalled once again the miracle of the feeding of the 5,000: “There is plenty to share. No matter how little we think we have, Jesus multiplies it until all have enough. That is the power of the Table, the power of Jesus Christ ― in Christ there is always enough.”

Cho concluded by challenging this new Triennium community, only formed this week as Presbyterian young people from all over the country and from 50 countries around the world gathered. “We are not called to do this alone but in the community of Jesus Christ,” she said. “Imagine if all of us spoke the truth of Jesus. Would it be considered a miracle? Remember: it only took one youth for Jesus to feed 5,000.”