Home News Picking up the pieces

Picking up the pieces 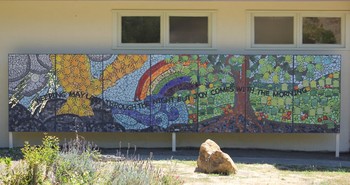 From shattered bits of ceramics and glass gathered at the site of a huge gas pipeline explosion that killed eight people three years ago here, members of Bethany Presbyterian Church recently pieced together a healing for themselves and the surrounding community through a poignant mosaic.

Three members of the Bullis family and Bethany’s congregation — Lavonne, 82, her son Greg, 50, and his son William, 17 — were killed instantly inside their home near the epicenter of the violent blast that destroyed 38 houses in the Crestmoor neighborhood on Sept. 9, 2010.

All that was left of the Bullis home were pieces of cups, saucers and Christmas decorations from Lavonne Bullis’ collections. Lavonne’s daughter, Jeannie Bullis Young, found shards of the orchid pattern china used when the family gathered for Easter and summer birthdays, a small angel holding a harp and a sweet nativity scene that once decorated the home at Christmas, along with other reminders of happier times.

Young and other stunned family members scooped up the remnants out of the ashes of the family home while escorted by emergency personnel and Red Cross workers days after the tragedy. They tucked away the fragments, not sure what they would do with them.

Less than three years later, those precious pieces of family memories are part of a vibrant mosaic mural situated along an outer wall of Bethany’s sanctuary, with the words of Psalm 30:5, “Weeping may endure for a night, but joy comes with the morning,” winding its way through the piece. Church and community members worked together at several public workshops in February and March this year to create special tiles and piece them together with broken tiles, mirrors and glass.

The 5-foot tall, 21-foot-long mural depicts a dark, violent storm with a fiery phoenix rising up out of the ashes, a beautiful rainbow, cool waters and a strong tree with decorated handprints for leaves protecting green hillsides dotted with tiles shaped like bright California poppies and 38 houses — representing each one lost in the blast.

The idea for the memorial came out of a desire among the 70-member congregation to honor the residents lost in the explosion and help those grieving to move forward in hope. They funded the project used funds for the project out of money donated from all over the country in the wake of the tragedy.

“We really liked the symbolism of having something that was broken being put together into something more beautiful and meaningful,” said Linden Cady, a member of the committee that organized the project.

Said fellow committee member Kathryn Quickert, “If San Bruno can create something beautiful out of our brokenness, then we know that real healing from our shared disaster can happen, too.”

The two-year process of planning the mural, followed by public workshops where community members created the tiles and carefully pieced together the mural, proved to be more healing than anyone expected.

“It was actually the first activity we were involved in that reminded us of how they lived, not how they died,” Young said of the workshops.

Young said she came to dread returning to the city she grew up in after attending numerous memorials held in the days and months after the blast.

“All of those gatherings brought your mind and your heart back to the day they died and the way they died,” Young said. “We asked ourselves, ‘How many of these things can we put ourselves through?’”

Coming together to create the mural, “doing life together, spending hours together, being creative together, just visiting together … sitting there face to face as opposed to rows facing forward at a memorial service,” was incredibly healing, she said.

The church commissioned muralist Leslie Scott to design, plan and oversee the mosaic’s creation. Through her organization, On-The-Wall, Scott specializes in working with schools and communities on the creation of large-scale mosaic murals.

Scott has created two murals — one a memorial wall — at Westminster Woods Camp and Conference Center, located about two hours north of San Bruno in the Presbytery of the Redwoods.

“This one went really, really deep for me,” Scott said of Bethany’s mural. “Just knowing there was so much depth and meaning in this project was very humbling to me. I had people thanking me for helping them heal.”

Besides the Bullis family, other families who lost loved ones were there, Scott said, as were Bethany members and dozens of community volunteers. Bethany secretary and member Roberta Henry estimated more than 50 people beyond the congregation took part in the workshops. Many expressed how much participating meant to them. 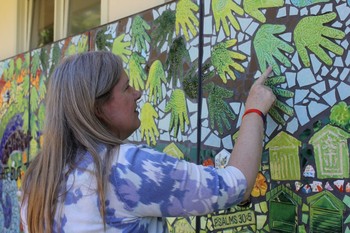 “It gave people a chance to do something positive that was related to this whole horrible, horrible disaster that just devastated the community,” Henry said.

Henry and Elder Andy Jones got the word out to the community by connecting with schools and scouting groups, distributing flyers and placing announcements in local media outlets. Local businesses donated materials and expertise.

“It’s helped connect the church to our larger community in a bigger way,” Jones said. “It’s unfortunate it had to take a tragedy to do it, but sometimes that opens doors when you didn’t think they were going to be there.”

San Bruno resident Joanne Arreola and her children came to two workshops after hearing about them on Facebook. Working side by side with other volunteers, they made poppy and house tiles, sometimes inscribing special messages on the backs. They also helped break ceramic and porcelain tile pieces and mortar them in place.

“I just thought it was a nice thing to do for our city and for all involved,” Arreola said. “It was close to the heart as well as something nice to be a part of.”

The mural was completed and installed just in time for a dedication ceremony on Palm Sunday. It stands facing the parking lot, where from time to time church members have seen people drive up and take in the powerful images from their cars before quickly retreating. There are plans to plant a healing garden in front of the mural so people can sit, pray and meditate.

Young called the dedication ceremony a “day of celebration” that reminded her that not only did her mother, brother and nephew live, “but they’re living now.”

“I can go back to San Bruno now,” Young said. “This is a city with good memories.”

Pam Marino is a communications professional and freelance writer in Sunnyvale, Calif.