Home News Love is a verb

Love is a verb

For Such a Time as This commissions nine new pastoral residents 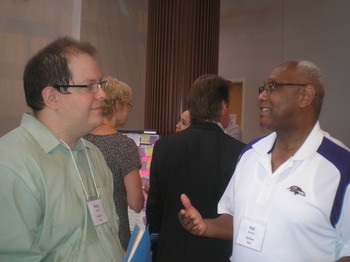 The Revs. Peter Sanders (left) and Hal Bennett (right) talk about the “For Such a Time as This” program after they were commission as pastoral residents in the Class of 2013. —Jerry L. Van Marter

The word “love” is thrown around a lot as a term of affection for everything from shoes to music, but real love demands action and commitment, said the Rev. Keri Shelton, a pastoral resident and mentor with For Such a Time as This.

Shelton was speaking at the commissioning of nine For Such a Time as This pastoral residents this morning (Aug. 28). The program pairs small, underserved congregations in rural, small town and urban settings with recent seminary graduates in a two-year pastoral-residency relationship, during which they are supported and guided by a cluster of pastor-mentors.

“New seasons and new stories in the church always begin with celebration,” said Linda Valentine, executive director of the Presbyterian Mission Agency. “As we commission the members of the class of 2013, we affirm their gifts as transformational leaders in and for Christ’s church. This service is designed to remind them that as they go forth in ministry, they go with God. They also go surrounded by the support and encouragement of the whole PC(USA).” 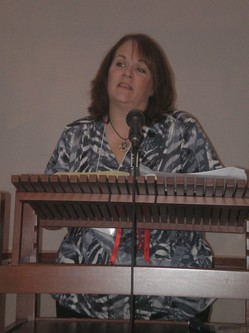 The Rev. Keri Shelton , a pastor-mentor with “For Such a Time as This,” preaches at the commissioning service for the 2013 class of pastoral residents. —Jerry L. Van Marter

Preaching on John 21:15-19, Shelton reminded the residents that love is a verb.

“(Jesus) is trying to help Peter understand that loving him requires more than mere words of affection,” she said. “Christ calls Peter and each of us, as individuals and communities of faith, to follow him even when and where we would rather not go.”

The residents in the program will answer this call daily in their new ministries.

Jesus knew that such a call would not always be easy for Peter — he told him that his life would change and that he would no longer be in control.

“While the call to ministry is not always easy, Christ does not send us out alone,” Shelton said, adding that the residents will have the power of the Holy Spirit and a network of colleagues, mentors and presbytery leaders to provide support.

In the program, each pastoral resident is assigned a pastor-mentor from the presbytery. The residents and mentors will meet one-on-one and in monthly cluster groups to discuss spiritual practice, ministry and a case study. The residents will also meet at three national gatherings during their two-year terms. 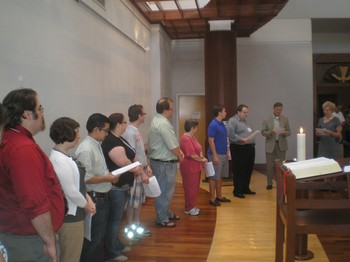 The nine pastoral residents in the 2013 class of “For Such a Time as This” are commissioned by Associate Stated Clerk Tom Hay and Presbyterian Mission Agency Executive Director Linda Valentine. —Jerry L. Van Marter

“We will nurture you and support you and, when necessary, speak the truth in love to you,” Shelton said. “You are called to put love into action — to feed, tend and care for God’s children.”

Tags: for such a time as this