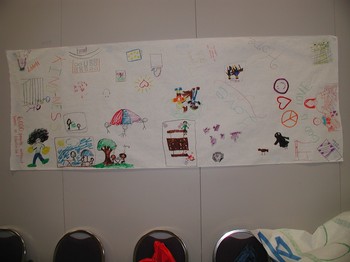 Presbyterian children visited with people at Wayside Christian Mission and drew a mural about their experience. —John Filiatreau

The children range in age from about 6 to 11.

“I met a man named Frank, and we really got to be friends,” said Isaac. “We really had a lot in common. It was good just to make a new friend.” His new friend had been released from jail just that morning.

“The people at Wayside were so touched by the little things we gave them,” said Sarah. “They were things like boxes of tissues, Wet Wipes, combs, socks, toothbrushes and toothpaste.”

“They were just tickled to death,” said the Rev. Sandra Shepherd, a coordinator of the program. “One man was especially touched by the card Sarah gave him. He said, ‘You have no idea what this means to me. It touches my heart. And it’s so long since I’ve been given anything hand-made. I’ll keep it forever.’”

“Our theme for the program was ‘Love God and Love Others,’ and love God through loving others,” said Shepherd, a Cumberland Presbyterian Church minister who said she’s happily between churches. “It has really been a thematic connection with this (Big Tent) event. We’ve made it a children’s conference within the conference.”

Andrew said one of the men “drew a dirt bike for me ― here it is, in fact” ― as he pointed at the drawing inserted in his conference name tag. “He’s a really good drawer, and he’s also good at Etch-a-Sketch. He was very kind.”

Sammy said Frank and he played checkers. “And we talked about Egypt, which is where I’m from. And we’re both good at drawing.”

After returning to the conference center, the children collaborated on a large, colorful mural depicting their experiences.