The world comes to Costa Rica 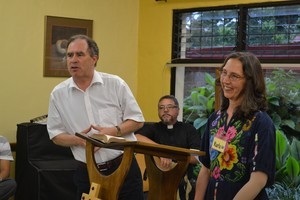 In July the world came to the Latin American Biblical University (UBL). The Global Institute of Theology (GIT), a program of the World Communion of Reformed Churches (WCRC), brought theology students and professors from 16 countries together on our campus in Costa Rica for three weeks of classes focused on the theme "Transforming Mission, Church and Community.”

The GIT, which was first held in Ghana in 2004, seeks to train new leadership for Reformed churches around the world with an ecumenical vision and a commitment to social justice.

I was one of several faculty members of the UBL who were asked to teach an elective course for the GIT. The 11 students who took the course I led on Christian mission and Latin America brought questions from their own contexts.

Sally from Indonesia was curious about how Latin Americans do contextual theology in a context where the majority of people are Christians. In her country contextual theology has to be done in conversation with Islam, which is the dominant religious group.

Pulak from India, where the churches are embracing aspects of Indian cultures, asked how Christians from different cultures in Latin America incorporate elements from their own cultures into the lives of their churches. 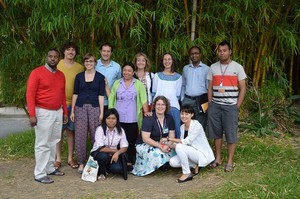 Karla Koll (back row, third from right) and her GIT students. —WCRC Photo

As they learned about mission thought and practice in Latin America the GIT students helped me see the context in which I serve with new eyes.

In general the GIT students didn’t know very much about this part of the world before they came. EJ, a student from South Africa, said when he was accepted for the GIT he had to get a map and find Costa Rica. Bonganjalo, also from South Africa, told the class he had thought that liberation theology started in South Africa.

In the class we talked about how liberation theology began as Latin American Christians sought to transform their contexts of poverty and exclusion. Hee Kyung from South Korea said that before she came to Costa Rica she had been taught to be afraid of liberation theology. At the UBL she discovered that mission is not just about evangelism but is also about good news for those who are poor and in need.

Throughout the GIT, participants wrestled with the practical and theological consequences of colonialism. In places like India and Indonesia, colonized by the English and the Dutch respectively, Christianity is often still perceived as a foreign religion. Here in Latin America, Christianity was brutally imposed on the indigenous populations.

Yet in these places and many others today communities are appropriating faith in Christ and making it their own. They are also engaging in mission in new and creative ways, often from the margins of political and social power structures.

GIT participants also worshiped in local churches in the San Jose area on Sunday mornings. Kelly Bwalya of Zambia told the congregation of the Prince of Peace Presbyterian Church in the Desamparados neighborhood about how he rode 50 kilometers on his bicycle each week to visit the three preaching points of the congregation he serves. The Costa Rican Presbyterians smiled as they tried to picture their own pastor on a bicycle.

Martine Oldhoff of the Netherlands shared about what ministry is like in a country where only 5 percent of the population is involved in the church.

Though English was the language of instruction for the GIT, songs were sung and prayers were prayed in several different languages during the morning devotions and the evening worship services. The halls of the UBL rang with a variety of rhythms and joyous sounds. Our campus seems so quiet now without the presence of the GIT.

None of the current UBL students were able to participate in the GIT due to both the language barrier and their class schedules. However, they interacted with the GIT participants in the residence hall and on the soccer field. We also organized a more formal session in which our students and the GIT students shared what it is like to study theology in different parts of the world.

One of the positive outcomes of the GIT for the UBL has been the increased interest our students are showing in the global church. Danitza, a student from Peru, came into the history course I am now teaching and said she wants to learn more about churches in Africa after sharing with students from that continent.

As a mission co-worker of the Presbyterian Church (U.S.A.), GIT gave me a chance to celebrate the way our denomination both supports and is encouraged by the worldwide Reformed family. Several of the GIT students from Indonesia had taken classes with the Rev.  Rebecca Young, one of our mission co-workers, who serves at Jakarta Theological Seminary.

Presbyterian World Mission links us with our sisters and brothers in many places in God’s world. Thank you for being part of these efforts through your prayers and your gifts. I hope you will continue to support Christ’s church around the world by supporting our mission co-workers.