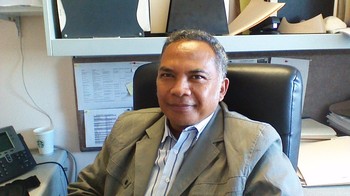 On this sunny Monday afternoon (Sept. 22), the Rev. Lala Haja Rasendrahasina, denominational head of The Church of Jesus Christ of Madagascar (FJKM) and one of a dozen members of the Presbyterian Peacemaking Program’s 2014 cohort of International Peacemakers, finds himself sitting in a small office inside the headquarters of the Presbytery of New York City, located near the Hudson River.

Meanwhile, across town along the East River, the United Nations’ General Assembly sits in session inside its headquarters with, as always, peace on the agenda.

On paper, it’s the perfect opportunity for the peacemaker affectionately known as “Rev. Lala”:

“There’s a Cold War between the politicians, stake-holders and (other) leaders against religion,” says Lala, adding that this tension, approaching its 55th year, bubbles up and over into a coup every five or seven years, with the latest one in 2009.

Each year the PC (USA) invites leaders from its partner churches around the world to share their experiences as peacemakers in their own lands. Today, even though New York’s temperature is pushing up to a Madagascar-like 80 degrees, in the waning hours of summer ahead of fall’s debut, Lala is experiencing something of an early-autumn chill.

Frankly, he’s feeling a bit left out in the cold. If he had his druthers, he’d prefer being frozen – NYPD and Secret Service call the security perimeter they establish around the UN to protect the delegates the “Frozen Zone” ― but that requires special security clearance.

Thus the irony of a peacemaker’s efforts to personally share his message thwarted by the stringent requirements to protect the UN’s peacemakers. Perhaps even more ironic: Rev Lala can’t even hold a meeting with them in the offices of  Mark Koenig and the Presbyterian Ministry at the United Nations a mere half-block from the UN campus because these offices, too, lie within the Frozen Zone.

So, while somewhat dismayed to be sitting on the “wrong” side of Manhattan Island,  Lala welcomes the opportunity to detail his quest for an end to what he characterizes as a “Cold War” that’s been ongoing since Madagascar won its independence from France in 1960.

It’s not the first time he’s been caught on the wrong side of circumstances. It happened most notably ― or, perhaps, most ignobly ―during the March 2009 coup. Ousted President Marc Ravalomanana and many of his cabinet and political allies were members of the FJKM. As head of the church, Lala became a victim of guilt by association; things turned ugly for him on St. Patrick’s Day.

“I was violently arrested, beat up and thrown in a detention room at a military barracks,” he recounts.

Luckily, intercessions from many friends and international organizations including the PC(USA)  prevented Lala from languishing  beyond the wee hours of the following morning. However, the FJKM wasn’t spared from the seizure of some records and property, nor the shuttering of its radio station. These are still being held “captive.”

In a sense, says Lala, the people of Madagascar today are still economic prisoners of their 1960 independence and the resultant turmoil and coups.

“The ‘Cold War’ has led to an increase in poverty,” Lala says. Current statistics from the International Monetary Fund, the World Bank and the Central Intelligence Agency show Madagascar’s per capita income under $500.

He laments the one step forward and two steps back pace of progress.

For all intents and purposes, the 2013 political elections which put new government officials in place at the beginning of 2014 have rebooted the discussions back to square one. Lala says that whatever progress was gained with the pre-2013 government has seemingly disappeared. No talks have been held this year and none are scheduled.

Despite calls from “some political and international voices” to pull back on his pursuit, Lala says he’s redoubled his efforts restart “Peace through Reconciliation…in order to have a lasting, stable country.” He fervently believes that once reconciliation grabs a foothold, peace will not be far behind.

He was also scheduled to address the Presbytery of New York City about “Ministry in the Context of Poverty, Violence, Environmental Destruction, Unemployment” during the body’s stated meeting of September 27 at the Holmes Presbyterian Camp and Conference Center in Holmes, NY.

There are also the “Skype dates” with his wife of 27 years, Zoe, some 8,600 miles and seven time zones away from New York.

Then it’s off to share his message of peace with audiences in Kansas, Montana and Florida.

...which is all well and good but, in all honesty, the Rev. Lala Haja Rasendrahasina truly hopes to be mediating “Peace through Reconciliation” with the political powers that be in his native Madagascar.

Jim Nedelka, a ruling elder at New York’s Jan Hus Presbyterian Church & Neighborhood House, has been contributing to the Presbyterian News Service since 2007.