Reflections on the Khulumani Support Group 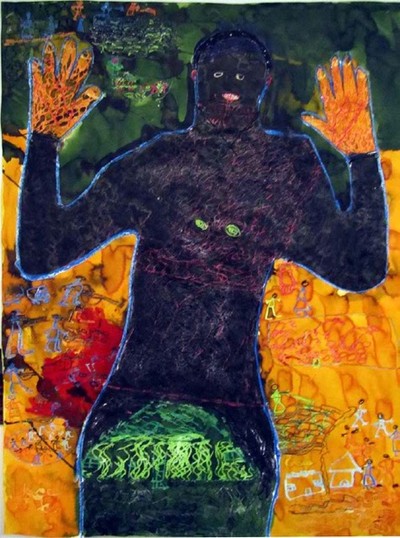 A painting produced as part of an art therapy project the Khulumani Support Group, a South African network of Apartheid survivors and victims. —Courtesy of Presbyterian Peacemaking Program

The painting is one of dozens produced as part of an art therapy process undertaken by the Khulumani Support Group, a South African network of Apartheid survivors and victims.

Khulumani works on behalf of those forgotten by the official South African reconciliation process, both by voicing their needs to the powerful and by helping them speak for themselves.

Khulumani is story-telling as an act of political advocacy.

We were fortunate enough to meet with several of the Khulumani organizational staff, and I emerged profoundly grateful for the relentless ministry of these witnesses, fearless and tireless crusaders with one driving conviction: that all victims deserve to have their voices heard.

But I also emerged thinking about Mike Brown.

How could I not, looking at images that so mirror the pose proudly worn by Ferguson (Missouri) protesters? How could I not, when their cries echo even here in South Africa: “Stop! Don’t Shoot!”

South Africa is not a post-racial utopia. “The Struggle Continues,” as it is carved in Latin in the foyer of the Constitutional Court, and as everyone we have met will gladly admit. What I find here is not a country where racism is somehow less of a problem or where its consequences have been somehow less severe.

For that, I am thankful, yes, but also, and more to the point, profoundly challenged.

Since his ordination in 2013, Matt has been pastor of Amherst Presbyterian Church in Virginia. He grew up in a number of towns, mostly on the east coast of the USA. He spent two (“frustrating”) years in a doctoral program in Film Studies before discerning a call to ministry, and he retains interest in media and digital culture.  His wife, Sarah, is associate rector of an Episcopal church, and they have a three-year-old son, Charlie.