Home News ‘The call to ministry is above rejection’

‘The call to ministry is above rejection’

An interview with South Africa’s (and PSCE’s) Rev. Maake Masango 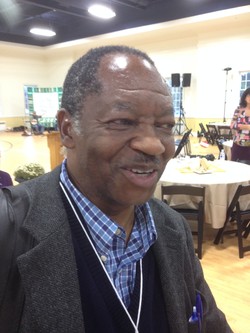 Masango traveled to Richmond in early November for the centennial celebration of PSCE ― now part of Union Presbyterian Seminary here. While here, he sat down for an interview with the Presbyterian News Service and spun his wondrous story.

“A group of 25 Presbyterian Women from the PCUS (the former Presbyterian Church in the United States) came to South Africa in 1978 and I spent several weeks showing them around,” said the South African pastor and anti-apartheid leader. “At the end of the visit, one of them, Ms.  Emma Boone, asked me how they could help.”

A year later, Masango, who was ordained in 1975 by the Presbyterian Church of Southern Africa ― now the Uniting Presbyterian Church in South Africa ― came to the United States on a PW scholarship. He first attended Columbia Theological Seminary in Decatur, Ga., and in 1982 graduated from PSCE with a Masters of Education degree.

He is no doubt one of PSCE’s most unlikely graduates.

“We were forcibly moved six times during my childhood,” Masango recounted. Under apartheid, which was established in 1948 after Afrikaaners took over rule of southern Africa from the British, the government regularly relocated South African blacks away from urban areas as cities spread.

“The trucks would come in the morning and bulldoze our houses, then took us and our furnishings to our new digs by the end of the day,” he recalled. “The only places they didn’t touch were churches and schools … which in our areas were mostly church-owned.”

There were four classes of schools in the South Africa of the mid-20th century: African, Indian, Black and “colored” (mixed race). “They thought: ‘We have to educate blacks so they can take instruction from whites,’” Masango said.

At the university level, very few courses of study were open to blacks. “We had a choice of ministry, teaching or nursing,” Masango said. “I lived with all these preachers in my home so I really had no choice.”

Ordained in 1975, Masango was sent to a rural area. “They did that,” he said. “Graduates from urban areas were sent to rural parishes and vice-versa.”

Cracks were already appearing in the apartheid structures of South Africa. “From the mid-1950s, blacks had to have a permit to come into cities to work. It was a real hardship for families, and the church started to help,” Masango recalled. “On March 21, 1963, there was a mass shooting by police in response to protests against the travel passes.” That infamous shooting at Sharpville began to galvanize the anti-apartheid movement.

“Most of the organizing took place in churches and workplaces,” Masango said. “Some organizing occurred at universities, though students were sorted by tribe to discourage Africanism.”

The anti-apartheid movement was still growing slowly ― but steadily ― when Masango came to Columbia Seminary and then PSCE. It was also growing more dangerous for those who were involved. Lengthy prison terms (Nelson Mandela) and political assassinations (Steven Biko and others) became more common.

Nevertheless, Masango said, “I was very clear that I was going back to South Africa after my studies because the demand for educated clergy was so great. In school here we had many meetings to discuss the theology undergirding apartheid ― the U.S. church was therefore critical to the development of the Belhar Confession.” That confession is currently being voted on by the PC(USA)’s presbyteries for inclusion in the denomination’s Book of Confessions.

The tide against South Africa’s apartheid regime began to turn when Western nations ― led by U.S. President Jimmy Carter in the late 1970s ― began imposing sanctions, beginning with arms. “Reagan funneled arms to South Africa through Israel,” Masango said, “and sanctions were controversial until Desmond Tutu said they would be beneficial and would hurt the South African government more than they would the people. Then sanctions accelerated.”

Upon returning to South Africa in 1982, Masango served as director of Christian education for the Presbyterian Church of Southern Africa, a position he held until 1987. “Tutu said we needed more clinical workers, so I returned to the U.S.”

Masango chose Columbia Seminary over the all-black Interdenominational Theological Center ― which included the PC(USA)’s Johnson C. Smith Seminary ― “because I needed to live with white folks,” he said. “I was going to have to deal with it back in South Africa. The experience forced me to be in a classroom with whites and to face the reality in South Africa. It made me work harder.”

Masango was in Berlin on his way home to South Africa in 1989 when the Berlin Wall fell. “When the wall came down, I thought, ‘Well, then, apartheid is very small and won’t continue’ … and it didn’t.”

In February 1990 South African President FW de Klerk announced Nelson Mandela’s release after 27 years in prison and began the slow dismantling of the apartheid system. In 1992 a whites-only referendum approved the reform process. On April 27, 1994, the first democratic elections were held in South Africa, with people of all races being able to vote.

Masango said the Truth and Reconciliation Commission instituted by Mandela was the only way a peaceful transition could have come to South Africa. “The future at the time was very clouded,” he said. “Blacks were impatient, the military was fearful, extreme parties wanted more punishment of those affiliated with the apartheid regime. It was Mandela’s dream and Tutu gave it the theological framework.”

In the midst of all this, Masango was called as pastor by St. Giles Presbyterian Church in Johannesburg ― a white congregation. “There was some tension because some thought I was detaching from the black church,” Masango said, “but pioneers always have to face that pain.”

Since 1994, Masango has served as professor of practical theology at the University of Pretoria ― the university that “created” apartheid.

“You cannot be called into ministry in a racist way,” Masango said. “I had to learn to love the people I hated in order to witness to the gospel and live into the new future.”

Some students in his early years at the university got up and walked out on his classes. “I refused to allow them to be suspended as the dean wanted because my courses were required so I knew they would be back,” he said.

The call to ministry, Masango said, “is above rejection ― by whites who were offended and blacks who thought I’d turned my back. I was preparing people for ministry. Period.”