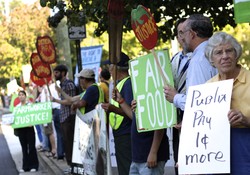 Presbyterians and members of the Coalition of Immokalee Workers gather to raise awareness of farmworker rights at a 2013 demonstration outside of a Publix supermarket in Atlanta. —Photo courtesy CIW

Farm work is described as one of the most difficult and underpaid jobs in America. Now, a new documentary is raising awareness of the abuses faced by farmworkers in the United States. The film, “Food Chains: The Revolution in America’s Fields,” was released last month and focuses on a group of tomato pickers from southern Florida.

The Coalition of Immokalee Workers (CIW), a mission partner with the Presbyterian Church (U.S.A.), is human rights organization with more than 4,500 farmworker members. For years, farmworkers have faced physical and sexual abuse, extremely low wages and poor living conditions.

Meanwhile, large buyers such as fast food and supermarket chains have been cashing in on an estimated $4 trillion empire. Their hold on agriculture has contributed to the conditions farmworkers now face, according to film producers.

“Farmworkers are not paid by the hour, but by the piece, which means they have to work longer and harder to meet minimum wage,” said Andrew Kang Bartlett, an associate with the Presbyterian Hunger Program. “On average, they earn from $10,000 to $12,500 a year, which puts them right around the poverty line for an individual.”

Research by the film team has also shown that thousands of female farmworkers face sexual abuse on the job. Many refuse to file formal charges for fear of deportation or loss of income. There have been reported cases of farmworkers being held in debt bondage, a byproduct of an agricultural system dependent on immigrants.

“The farmworkers who plant and harvest crops work one of the most dangerous and low-paying occupations in the country. The danger involves working in extreme heat without regular water stations to hydrate their bodies in addition to operating dangerous, heavy machinery,” said Kang Bartlett. “Their life expectancy is the shortest of any occupation in the US — 49 years as compared to a national average of 75.”

The film, produced by actress Eva Longoria and journalist Eric Schlosser, brings the entire issue to light as well as efforts by the CIW and others to change the mindset of corporate America. It premiered at the 2014 Berlin International Film Festival and has been featured at other film festivals around the world.

The CIW was organized in 1993. In 2011, it launched the Fair Food Program, which encourages large retailers such as fast food restaurants and supermarkets to pay one cent more per pound of tomatoes picked and boycott purchases from farms that violate human rights. Twelve major food-related corporations are supporting the program: McDonald’s, Yum! Brands, Burger King, Walmart, Whole Foods, Trader Joe’s, Chipotle, Aramark, Compass Group, Bon Appétit, Sodexo and Subway. The program is helping more than 30,000 farmworkers in Florida.

“The PC(USA), through the Presbyterian Hunger Program, has helped facilitate negotiations between corporations and the farmworkers themselves,” Kang Bartlett said. “We’ve been part of the farmworker-led strategy of mobilizing people to bring greater attention to the realities of farm work and realities of modern day slavery in the US and respond to whatever requests of support we get from the CIW.”

In May, PC(USA) leaders joined other religious leaders around the country to call on Wendy’s to work with the CIW in the Fair Food Program. In a letter to Wendy’s CEO Emil Brolick at the annual shareholders’ meeting, the group urged the Ohio-based company to consider the bigger picture in food purchases.

“The gains the CIW has achieved to bring safety, better pay, freedom from sexual abuse and dignity to the fields where our sisters and brothers harvest our food will only be permanent when all buyers agree to the standards of the Fair Food Program,” said Gradye Parsons, stated clerk of the General Assembly, in the letter. “Wendy’s should join Walmart and the others in the mighty flood of justice sweeping through the fields of Florida and beyond.”

“The CIW has created an inspiring model that brings together farmworkers, growers, corporations and consumers in common purpose to ensure human freedom and dignity,” she said in the letter. “The PC(USA) will continue to stand with farmworkers and workers throughout the food chain until the day when all are afforded the rights and fairness they deserve.”

The Presbyterian Hunger Program has worked with CIW for more than 11 years, helping the coalition connect with Presbyterian congregations around the country. The result has been an outpouring of volunteers and advocates who participate in vigils and rallies in support of the coalition.

“Presbyterians around the country have responded with solidarity and faithful action to amplify the farmworkers’ call for dignity and justice in the fields,” Kang Bartlett said.