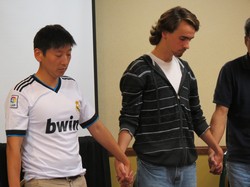 Young adults gather in prayer during an event in Louisville earlier this year. —courtesy of The Racial Ethnic Torch

The Rev. Manuel D. Silva has always felt called to youth ministry, but in his home of Puerto Rico, youth work is not always seen as important.

“I’ve been working with youth since I was 15 years old, but youth ministry is not always valued, as though you are not mature enough to be a pastor,” he said. “For someone who was called to youth ministry, it’s difficult to receive support.”

This is one of the reasons Silva feels strongly about taking part in the development of a Hispanic youth network, which was mandated by the 220th General Assembly (2012).

“I’m visualizing ways to let the Hispanic community know that there are youth ministers in the church who need to be given tools to work with the youth, because right now it’s very difficult for youth workers to develop in their ministry.

“In Puerto Rico, we have 29 churches; most of them don’t have any youth in them,” he said. “If the people of the church die, we will see our presbytery dwindle to just 15 churches. This is extremely important in Puerto Rico and for all of the PC(USA). If we don’t do something now and train our pastors and our youth — if we don’t look for people who are called to youth ministry and nurture them — our church will slowly get smaller and smaller.”

The day before she gave birth to him, Silva’s mother was baptized in the First Presbyterian Church in Mayagüez, Puerto Rico. His parents and other elders planted a second church — his home church of Alturas Presbyterian — when Silva was eight years old. He later went to seminary in San Juan, graduating in 2008. He was ordained a year later and served as pastor of a church in Guánica, Puerto Rico, for nearly three years.

In 2012, he began serving as a part-time pastor at Marina Presbyterian Church in Mayagüez, and it was there that he began to experience the unique challenges that go beyond youth ministry to intergenerational ministry.

“I spent my first year preaching about love and teamwork and working together and what the work of the church should be, forgetting the divisions of the past,” Silva said.

He estimates 75 percent of the church is 65 years of age or older and 25 percent is under 50. Silva says he focuses on a message of empathy for the community and a vision of teamwork in which all ages and ministries work together.

It’s important to encourage those in youth ministry so they can help close the gap between generations and create understanding, Silva said. That means being supportive and allowing them to attend workshops so they can recharge, share the challenges they’re facing to find solutions, and learn new ways to ignite excitement among Presbyterian youth and young adults.

“It’s why developing this Hispanic youth network is so important,” Silva said. “It’s being there to support and orient the Hispanics within the church.”

This article originally appeared in the November 2014 issue of The Racial Ethnic Torch magazine.