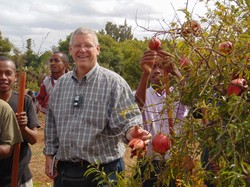 A high number of plants and animals occur naturally only in Madagascar, an island nation off the coast of southeast Africa. Presbyterian Church (U.S.A.) mission co-worker Dan Turk believes that Christians have a responsibility for preserving creation, as written in Genesis 2:15: “The Lord God took the man and put him in the Garden of Eden to work it and take care of it.”

In addition to protecting God’s creation, new pastors of the Church of Jesus Christ in Madagascar (FJKM), the PC(USA)’s partner church in Madagascar, not only are tasked with spreading God’s word through evangelism but also face the challenge of ministering to people who are not getting enough to eat. With a per capita income of less than $250 per year, many Malagasy people have difficulty feeding their families. Sometimes pastors themselves have a difficult time feeding their own children on their meager salaries.

In the past, Dan has taught more than 250 students from the Ivato Seminary in Madagascar how to grow vegetables and fruit trees from grafted plants.

With Dan’s help, the FJKM plants native trees at seminaries, churches, schools and other public areas. At the Ivato Seminary, school groups are making field trips to see the native trees and learn about them. By helping young people learn the value of native plants, Dan hopes he is protecting the island’s biodiversity into the future.

Planting native trees is one way to draw attention to and provide education about the value of native flora and fauna. Madagascar has several native trees that are widely planted for their ornamental qualities. Others have value for environmental education because of their rarity or stories related to the history of the island.

“There are nine species of Baobabs in the world. One is native to Australia. Two are native to Africa and six occur naturally only in Madagascar,” Dan said. “Many Malagasy children, especially those living in central and eastern Madagascar, have never seen a Baobab tree, much less know that Madagascar has twice as many species as the rest of the world combined.”

Deforestation of Madagascar’s remaining native forests is proceeding very rapidly, leaving many species in danger of extinction. Today, less than 25 percent of the country’s native forests remain. Reforestation is not keeping pace and is mostly done with exotic species like eucalyptus and pines. Even the ornamental species planted in the city are mostly non-native, like Jacaranda trees and Royal Palms.

In 2014, with the FJKM, Dan founded a program called Fruits, Vegetables and Environmental Education (FVEE) at seminaries and synods in Madagascar, beginning with the Fianarantsoa Seminary in south central Madagascar. In addition to training new pastors, the program will provide follow-up with those pastors who have already received fruit and vegetable education in how to incorporate gardens and orchards into their ministry.

The program also involves professionalizing the Ivato Seminary orchard and nursery, which will produce grafted plants to be grown at other locations. There are also plans to continue to grow and label native plants at Ivato to attract school field trips and foster environmental education. Ivato will continue to offer a course on practical gardening and fruit growing with lessons in orchard management and plant propagation. About $25,000 will need to be raised for the five-year project.

Born in Atlanta, Dan graduated from Davidson College in North Carolina with a bachelor’s degree in biology. He earned a master’s of science in agronomy and soil science from the University of Hawaii at Manoa and a Ph.D. in forestry from North Carolina State University. His doctoral research focused on the growth rates of more than 60 native Malagasy trees. Dan spent two years as a consultant in agroforestry to the Ranomafana National Park project in Madagascar. He is the author of A Guide to Trees of Ranomafana National Park.

Dan and his wife, Elizabeth, were invited to serve in Madagascar through the FJKM’s development branch, which includes departments of health, environment, agriculture and safe drinking water. The FJKM believes that Christian witness should include ministry to the physical and spiritual needs of God’s people and care for all of God’s creation. Dan and Elizabeth work as advisors to FJKM’s environment and health departments.

Dan writes: “Madagascar is a special place, both in terms of its biodiversity and its people. The country is beautiful, and its animals and plants are a naturalist’s paradise. The people are gracious. They are amazingly happy and positive in outlook, despite widespread poverty. The needs are great here, but so are the rewards.”

This story was originally published in the Winter 2014 edition of Mission Crossroads magazine.