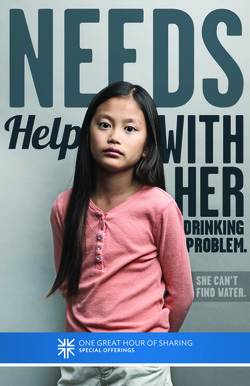 Editor's Note: Please be advised, this campaign has been canceled. The Jan. 12, 2015 article, "Special Offerings to revise promotional campaign," states, "After much criticism, the Presbyterian Church (U.S.A.)’s Special Offerings is revising its 2015 campaign for the One Great Hour of Sharing offering."

When Presbyterians see the marketing materials for the 2015 Special Offerings, organizers are hoping the provocative images will prompt them to continue their donations — or to become involved for the first time.

Only about half of Presbyterian Church (U.S.A.) congregations participate in the denomination’s four Special Offerings, and the marketing campaign is designed to make people take a second glance and learn more about the offerings, said Sam Locke, director of Special Offerings.

“I hope that it’s a powerful message and causes folks to pay attention to Special Offerings,” Locke said. “It really speaks to the heart of the impact Special Offerings have around the world.”

The images, which use wordplays to deliver a message, are meant to highlight the absurdity of the stereotypes people might have about the people benefitting from the offerings, Locke said. 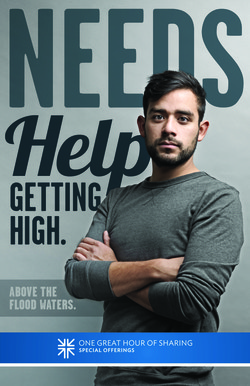 Designed by xiik, a marketing agency in Indianapolis, the campaign relies on powerful images and informational graphics rather than the long narratives used in the past. Special Offerings staffers hope the designs will bring a fresh perspective to the offerings.

“We hope folks see this as a bold statement of what we’re doing together,” Locke said. “The hope is also that folks will really see how the church is engaged in mission in a special way … Presbyterians are really involved in mission for a long-term impact.”

The PC(USA)’s four Special Offerings are Pentecost, Peace & Global Witness, Christmas Joy and One Great Hour of Sharing and address concerns like hunger, natural disasters and injustice. The first offering collected in 2015 will be the One Great Hour of Sharing, which is currently using donations to respond to the Ebola epidemic and human trafficking.