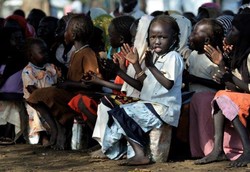 The Episcopal Church and the Reformed Church of America have issued similar calls to their membership. 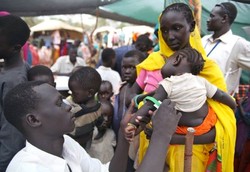 “The ceasefire that went into effect in South Sudan on January 23 provides a sign of hope,” noted Parsons. “Our brothers and sisters need our prayer and support as they seek to move into a future of justice and peace.”

South Sudan achieved independence in 2011. Violence erupted in the new nation in December 2013 after a political dispute between President Salva Kiir and his former deputy, Riek Machar.

The conflict resulted in many deaths and a severe humanitarian crisis. More than half a million South Sudanese have been forced from their homes. The UN High Commissioner for Refugees reports that, as of January 31, some 770,000 people have been displaced—646,400 within the country and 123,400 outside.

Recognizing current and historic partnerships between U.S. Presbyterians and the people of Sudan and South Sudan, Presbyterian leaders call on Presbyterians to pray on February 16, and at all times for the people, government, and churches of South Sudan. Prayers are requested for those who mourn the loss of loved ones, those injured in the conflicts, political and religious leaders, and all who work for peace and justice. A suggested prayer appears below. 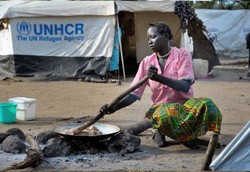 A South Sudan woman cooks in a refugee camp

Gracious God, we lift before you the people of South Sudan who seek to create a new future after a period of violence. Three years ago, we rejoiced with our sisters and brothers as they voted for independence and became the world’s newest nation. Over the past months, our hearts were heavy as a deep conflict threatened to destroy all for which they have strived. We mourned with those who lost loved ones in this unrest, with the children and adults who have become traumatized again and again, with those who are injured, imprisoned, and hiding, and with those driven from their homes. We give thanks for the ceasefire, but we pray for our brothers and sisters as they face the tasks of building a future together. God of reconciliation, we ask you to send your Spirit of unity and peace to guide the people and the leaders of South Sudan from violence and into the paths of peace and justice. We pray for our partners in the Presbyterian Church of South Sudan, the South Sudan Evangelical Presbyterian Church, RECONCILE, the South Sudan Council of Churches and Across; may they feel your presence with them. Strengthen them with the power of your Holy Spirit as they witness to the strong love of Christ, advocating for peace and justice in a situation that is only hopeful because we follow a resurrected Christ. In whose name we pray, Amen.

In addition to prayer, we encourage Presbyterians to:

May God guide the people and leaders of South Sudan into the paths of peace and justice. Through our prayers and actions, may Presbyterians support our brothers and sisters on that journey.

Read the call to prayer in Korean.