Illinois church experiments with worshiping in ways familiar and new 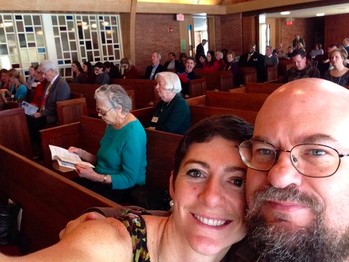 Though it was the seventh Sunday in ‘ordinary time,’ it was hardly an ordinary Sunday for the people of Winnetka Presbyterian Church.

Feb. 23’s Social Media Sunday — the first such worship experiment for the congregation on Chicago’s North Shore — was an experiment in learning how to worship in ways both familiar and new.

“Whether you are engaged in social media or not, we hope you will join us for this worship, which will be rooted in our familiar traditions while reaching for some new places together,” read the description sent to the congregation before the event.

“New technologies for communication and community building have made new kinds of connectivity possible — and we Christians are in the connectivity business!”

To some, having a social media Sunday might seem like the antithesis of worship — aren’t cell phones and mobile devices supposed to be silenced and put out of sight during worship? Aren’t these devices a distraction from what one is supposed to focus upon? It was a topic for conversation among the staff at Winnetka. Not everyone agreed with the idea of promoting social media during the worship space.

“We as a church are both respectful of and honoring of our Reformed traditions but also open to new and creative ways of encountering God in worship,” said the Rev. David Lower, pastor. “We were seeking a way to be who we are, but also to reach into thinking about worship in new ways.”

“What we came up with was a good compromise and a way of trying some new things, new ways of engagement with worship, but doing it in a way that we hoped wouldn’t freak people out,” said the Rev. Adam Walker Cleaveland (@adamwc), associate pastor.

The social media interaction for the morning included a check in at the church on Foursquare and/or Facebook, followed by shared prayers and a sermon discussion via Twitter and Facebook. The youth of the church also staffed a ‘help desk’ during the morning, which allowed them the opportunity to share some of their expertise with older and less social-media-fluent members of the congregation.

For Winnetka it was a Sunday to imagine and practice together these new ways of engaging the digital world faithfully and in the context of worship.

“I think that for those people who are always on their phones, it allows them to see that there is something they could do with that device during worship that will allow them to be more engaged with the worship service,” said Walker Cleaveland.

Some in the congregation took selfies during worship, posting them to their social networks — and in so doing, sharing their worship experience beyond the walls of the sanctuary.

“What this also did was to allow people to use social media as a form of evangelism — sharing the cool things that are happening here with their wider networks,” Walker Cleaveland said.

“One of the pieces that we are still trying to figure out is how to use these tools to enhance our worship and to help people engage worship in new ways,” he said.

One of the questions church leaders hoped to raise through the experiment was, “What might we learn from this emerging space and what might our faith and God’s light contribute to it?”

“I think we learned a lot, and there are many resonant chords that we struck which we will carry forward in our increasingly connected life,” Lower said. “We realized that we can keep experimenting — keep exploring — and looking for those ways in which technology makes what we Christians do even better and more powerful.”

A history of the interaction from Social Media Sunday can be seen at: http://storify.com/WinnetkaPres/social-media-sunday/