Home News 'Together for Peace in Syria'

'Together for Peace in Syria' 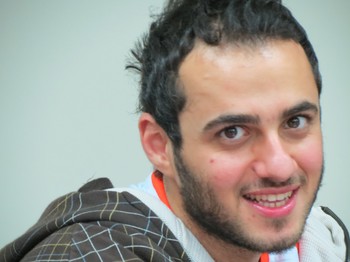 Syrian Multimedia Youth Team member Milad Alkaed, who is studying to be a doctor, wants the world to join in a simultaneous prayer for peace for Syria —Paul Seebeck

A group of young adults from churches across Syria are calling for the world to join them in kindling the candle of peace by praying together simultaneously on Friday, April 11, at 9:00 p.m. GMT (5:00 p.m. EDT).

The prayer event, “Together for Peace in Syria,” aims to send a message to the world about the power of peace — and to nourish the spirit of love in Syria to prevail — despite the pain of a three-year proxy war.

“We hope Christians — young adults — around the world become rebels for peace,” said Milad Alkaed, Syrian Multimedia Youth Team member. “We are sowing seeds of hope to achieve the impossible, using peace as a strategic option to stop the promotion and funding of war.”

The Syrian Multimedia Youth Team works for positive change within Syrian society by using modern media and technology to encourage local development and dialogue for peace. Many team members belong to PC(USA) partner churches and are leaders within the National Evangelical Synod of Syria and Lebanon.

“What a great opportunity for Presbyterian Church (U.S.A.) congregations to overpower the sounds of war and terrorism with a worldwide, unified cry for peace in Syria,” said Amgad Beblawi, Presbyterian World Mission’s coordinator for the Middle East, Central Asia and Europe.

Already, churches in Jordan, Egypt, Palestine, the United Arab Emirates, Germany and Canada have announced they will participate in the prayer.

“We are the most globally aware, connected generation in our country’s history. It makes perfect sense for us to join young adults in Syria in this effort for peace,” said Rob Fohr, young adult catalyst for the Presbyterian Mission Agency.

Tags: middle east, national evangelical synod of syria and lebanon, together for peace in syria