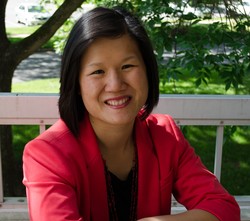 The Assembly runs June 14-21 in Detroit. The election is slated for the evening of the first day.

A native of East Hanover N.J., Kwong Abazia  received her B.A. degree from Rutgers University and her M.Div. degree from Princeton Theological Seminary. She also studied at the University of Sussex in Brighton, England.

“I believe that we need one another  to embody the fullness of the Church,” Kwong Abazia said. “Our ability to live in fellowship will define our faithfulness to God’s call to beloved community.”

A Chinese American woman, Kwong Abazia has served as co-moderator of Racial Ethnic Young Women Together (REYWT) and during her seminary years she worked with others to help create a process which resulted in the creation of the PC(USA)’s Office of Multicultural Relations. She has also worked with “That All May Freely Serve,” Presbyterian Women’s Racial/Ethnic Dialog, the Advance Justice Committee of Chicago Presbytery, and the Youth Workers Collective in Chicago.

“Larissa is a warm, caring individual, with great intellect as a Church leader and enthusiasm for our future as a denomination. I am honored that she has agreed to stand with me on this journey,”  said Rada.