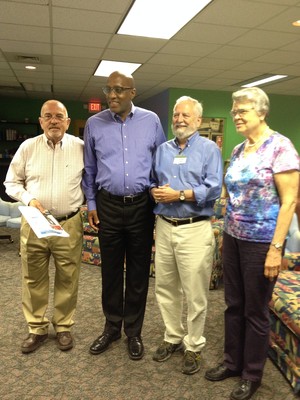 Returning to Salem Presbytery, the home of his first call, the Rev. J. Herbert Nelson had a message for the state of North Carolina.

Preaching on Romans 12:1-5, on the call to live out a transformative life, Nelson commended the people of North Carolina for presenting themselves as a “living sacrifice” through the ongoing witness of Moral Mondays, a protest movement organized last year by the North Carolina NAACP to fight against cuts to social programs, education reforms and changes to voting laws in the state.

“We are challenged today to be called one nation under God with freedom and justice for all,” said Nelson, addressing the ever-widening gap between rich and poor. “If we are going to overturn the tables in the temple in this present day, all 50 states have to begin to do what was started here in North Carolina. You are the bellwether for the South, you are the bastion of hope.”

Nelson, director of the PC(USA)’s Office of Public Witness in Washington, D.C., was speaking at the 102nd stated meeting of Salem Presbytery on May 17.

“Our struggle today is against [corporate] structures and powers because our values are so aligned to them,” said Nelson. “And yet the very calling of faith is a calling out of that relationship into a new one with Jesus Christ…that is counter-cultural to the dynamic of the world. Therefore in order to be transformers of the church, we have to be transformers of our own lives as people in the church.”

Nelson lifted up the Romans text as a charge to the church to exercise its “appropriate priestly service,” specifically advocacy on behalf of the nation’s struggling and declining middle class.

Nelson called upon the church to take action. “The challenge of the Presbyterian Church (U.S.A.) today is to stand up…until the kingdom of God is built up.”

Following the morning session, the Peace and Justice Task Force of Salem Presbytery hosted Nelson at a lunch, which was also attended by the Rev. Rosemary C. Mitchell, mission engagement advisor for the Presbyterian Mission Agency. Mitchell’s role is to link individuals, congregations, and mid councils with the work of two mission agency ministries, the Office of Public Witness and the Presbyterian Ministry at the United Nations. She also seeks to build financial support for these ministries, which have been identified as priorities for the mission agency.

“Both of these advocacy ministries, which have been active since the 1940s, are integral to being Presbyterian in our Reformed tradition,” Mitchell said. “Although Presbyterians have been deeply involved in advocacy for generations, a whole new generation is just now discovering this work.”

Nelson’s visit to Salem Presbytery began on the evening of May 16 with a screening of the documentary film, “Inequality for All,” hosted by the Rev. Frank Dew at the New Creation Community Presbyterian Church in Greensboro. Following the movie—which presents commentary by former Secretary of Labor, Robert Reich, on the growing abyss between the haves and have-nots in American society—Nelson offered a biblical and theological reflection connecting the film’s observations to the work of the Office of Public Witness. He concluded his visit on Sunday, May 18, by preaching two services at Westminster Presbyterian Church in Greensboro.

The Rev. Emily Enders Odom is communications associate in the Office of Communication of the Presbyterian Mission Agency and a frequent contributor to Presbyterian News Service.