PC(USA) mission co-worker in Africa speaks on her calling 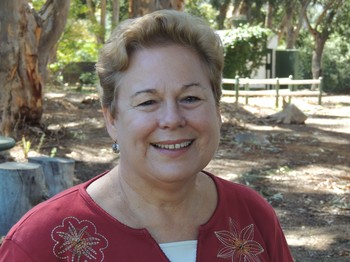 Her journey to her role as the Presbyterian Church (U.S.A.)’s regional liaison in East Central Africa wasn’t always clear, but Nancy Collins feels called to her work.

“God has led me to the place where I’m supposed to be,” she said May 20 as she spoke about her work in Zambia, Malawi, Rwanda and Kenya.

Collins identified various “aha moments” that she has experienced during her time in Zambia: the role of women, cultural differences, the hospitality of the people and the overwhelming faith of the church in the midst of poverty.

This “faith in the face of poverty” became a theme as Collins continued with her presentation, snapshotting various parts of her ministry.

Widespread evangelism and church growth is occurring in the region — a reality that made Collins a little wary.

“The ‘e’ word wasn’t one of my favorite words,” she said. “I was a little anxious about that.”

This anxiety is shared by many living in the United States; evangelism has become a term somewhat tabooed, with many fearing that it will steer new disciples away rather than draw them in.

But Collins has seen the evangelism in the congregations she works with and now agrees that it is a tool the church can use.

“The church here [in the United States] is shrinking, but I see these communities building new churches up and calling new members, constantly growing,” Collins said. “I agree now that it is a necessary focus.”

Collins also focused on the struggle with poverty that the churches are faced with. Despite this, churches work to address issues of education, clean water and health so that younger generations can live better lives.

Collins then spoke of her various roles as a regional liaison. In the Synod of Zambia, she accompanied leaders in creating a three-year strategic plan. One of the main goals that came out of this planning was to help fund the Chasefu Theological College, located in the bush of central Africa.

Collins’ role with the Presbyterian Church of Rwanda has been to support new mission co-workers and to encourage more theological education; the pastor-to-member ratio is 1:7,000.

In the Presbyterian Church of East Africa in Kenya, Collins has helped to connect the various partnerships that exist between churches and organizations in the United States and Kenya.

In Malawi, Collins has worked on collaboration between World Mission and the Synods of Blantyre, Livingstonia and Nkhoma in the Church of Central Africa, Presbyterian. A large goal within this has been to ensure equal distribution of resources.