Home News Play a song for everyone

Play a song for everyone 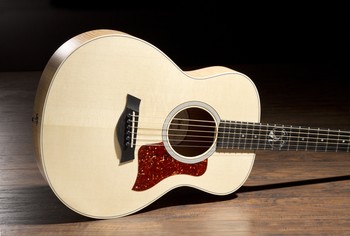 Proceeds from the sale of the Taylor GS Mini Holden Village guitar will benefit clean-water ministries, including Living Waters for the World. —courtesy Taylor Guitars

A series of seemingly unlikely coincidences has led to a new and far-reaching collaboration between a tonewood supplier, a guitar manufacturer and ecumenical clean-water ministries.

Pacific Rim Tonewoods, which supplies wood to the makers of acoustic musical instruments, has partnered with Taylor Guitars to produce guitars from wood salvaged from a Lutheran retreat center in Washington state. Proceeds from the sale will benefit two clean-water ministries, including Living Waters for the World (LWW), a ministry of the Presbyterian Church (U.S.A.)’s Synod of the Living Waters.

The story began last fall, when Young got an email from Dr. David Olson, a physician in Bellingham, Washington, whose Lutheran congregation has been involved with clean-water ministries, including LWW.

Olson told Young about Holden Village, a Lutheran retreat center on the site of an old copper mine. Waste from the mine was polluting a nearby creek, and in order to finish a clean-up project, the creek would need to be re-routed, meaning that a large section of forest on Holden Village property would need to be cut down.

Olson, whose family visits Holden Village every year and who just happened to have been a spruce ecologist before going to medical school, traveled to the area to say goodbye to the trees. When he arrived, he noticed that the trees were Engelmann spruce, a premium tonewood used to make guitars, pianos, cellos and violins.

“The fate of the trees was either to turn them into firewood or to mulch them,” Olson said. “I thought, maybe we can use some of these to make musical instruments.”

Olson, an amateur guitarist and instrument builder himself, reached out to the owner of Pacific Rim Tonewoods and told him about the spruce trees. The owner, who has also volunteered with clean-water ministries, agreed to harvest 10 of the trees for a charity project, using his sawmill to make guitar tops from the wood. He then met with Taylor Guitars, which agreed to use the tops for its popular GS Mini line of guitars.

“I see this project as a chain of generosity,” Olson said, explaining that Holden Village donated the trees, Pacific Rim milled the wood and Taylor Guitars is manufacturing the guitars and donating the proceeds to clean-water ministries.

“This doesn’t make sense economically but this does make sense in the context of generosity,” Olson said. “We’re essentially taking these first-world resources … and transforming them into something that can be used in the third world.”

Pacific Rim salvaged enough wood for 2,500 guitars, to be sold for $549 each; $165 from each guitar sold will be split between LWW and El Porvenir, a clean-water ministry in Nicaragua with ties to the United Methodist Church.

The instruments have been popular with church musicians, with many congregations buying the guitars as gifts for their music ministers, who then use them in worship.

“That becomes this avenue of joy,” Olson said. “People are just delighted to receive them.”

The guitars can also be used as a teaching tool to educate churches about clean water and collaboration.

“It’s not just a guitar anymore — it’s a story,” said Young, who bought one of the guitars himself. “It’s been a joy to have because I’m reminded of the story.”

To learn more about LWW’s role in the project, click here.