Before the business, 221st General Assembly opens with worship 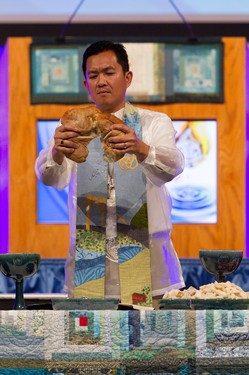 Moderator Neal Presa breaks the communion bread at Opening Worship at the 221st General Assembly of the PC(USA) in Detroit, MI on Saturday, June 14, 2014. —Michael Whitman

The sound of bagpipes filled the hall Saturday as the 221st General Assembly (2014) of the Presbyterian Church (U.S.A.) opened with an eclectic service of communion celebrating the "Abound in Hope" theme.

One of the highpoints of each Assembly is the opening worship, which models a breadth of worship styles and music and often sets the tone for the gathering.

The Alma College Pipe Band led the processional into Cobo Convention Center, followed by dancers from the Presbytery of Detroit Liturgical Dance Ensemble.

As the strains of "Scotland the Brave”and “Silver Wings" faded, the service switched to music and prayer native to Nigeria, led by Mary Margaret Flannagan of the Presbyterian Publishing Corp. and Ronald Perkins, Jr. of Martin Luther King, Jr. High of Detroit.

The service mixed business – the official opening of the Assembly and commissioning of the commissioners – with reaffirmation of baptism, prayer and proclamation by Neal Presa, moderator of the 221st General Assembly (2012).

Liturgists David Shinn, Michael Barconey and Emma Ouelette led the reaffirmation: “In baptism we were buried with Christ. In baptism we were raised to life with him, through faith in the power of God who raised Christ from the dead. Anyone who is in Christ is a new creation. The old life has gone; a new life has begun.”

Madeline Gillete, a member of Cherry Hill Presbyterian Church in Dearborn read from Romans 15:1-6 and 14, ending with the verse that contains the Assembly's themes: "May the God of hope fill you with all joy and peace in believing, so that you may abound in hope by the power of the Holy Spirit."

Presa then turned to Luke 24:28-51 for his sermon entitled "Pilgrims' Pitstops."

He opened by recalling the story of the Jesus walking with his disciples after his resurrection, then sitting at table with them and breaking bread to reveal his identity.

He said disciples of Christ need God’s guidance to be moved and be reminded of God’s purpose for our lives.

“We need continual calibration into the heart and mind of God,” Presa said. “You and I need to continually hear the gospel, for there is no other gospel than the goodness of Jesus Christ.”

Presa continued by expressing the idea of the hope that exists because of Jesus’ death and resurrection. There are pitstops, Presa stressed, but God always brings God’s disciples back to the path intended for them.