Home News Down by the Riverside: getting the discussions started

Down by the Riverside: getting the discussions started 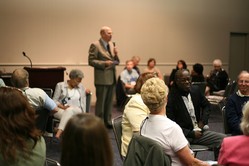 Cliff Kirkpatrick, co-moderator of the Special Committee on the Confession of Belhar addresses attendees during the Riverside Conversations —Danny Bolin

Even before the 221st General Assembly (2014) of the Presbyterian Church (U.S.A.) officially started, a series of Riverside Conversations Saturday morning gave commissioners and advisory delegates the opportunity to hear background and ask questions on some of the top issues they'll be addressing.

Two separate sessions were held, covering six issues: the Mid-Council Commission Report, the Confession of Belhar, Christian Marriage in the PC(USA), Mission Responsibility through Investment recommendations on engagement and divestment, moderatorial candidate introductions and Equipping the Church for Ministry with God's Diverse Family.

Ariel Mink and Byron Wade, co-chairs of the Mid-Council Commission II, joined Jim Wilson and other commission members to explain the conversation and collaboration they see as vital to redrawing synod boundaries. The commission's proposal would take synods down from the present 16 to no more than eight large, regional bodies.

A recent "View from the Field" from 14 of the 16 synod leaders took issue with some of the commission recommendations. Their concerns include contiguous synods holding little in common, funding and facilitating the consolidation process and the question of how moving to fewer synods will benefit the church.

But the commission said, “The church is living with a structure established for a larger church that does not serve the church’s needs in the 21st century. Whether by choice or diminished resources, the mission being conducted by many synods is less than in most presbyteries, and even by many congregations. At the same time, many synods that assess per capita do not appear to be generating results proportionate to their cost. Reconfiguring the synods opens the door to new possibilities, new ways of understanding their ecclesial and missional roles, and more efficient use of limited financial resources.”

If synods are to “retain any missional function into the future,” the MCC II leaders wrote, “they need to be of a sufficient size to fund and support such mission. That will not come by maintaining the status quo.”

Wilson described the work facing commissioners this way: “This is our last chance for synods to show that they have meaning.”

During the discussion on marriage, attendees heard that there seemed to be little interest in a request by the 220th General Assembly (2012) to study the issue of marriage.

“Sixty-nine of those presbyteries reported that they had studied the issue of marriage,” said Theology, Worship and Education Director Chip Hardwick, noting that the topic was “marriage, not same-gender marriage.” Ninety-one percent of those presbyteries also reported that between 0 and 25 percent of their congregations did not engage in a marriage study.

Of the presbyteries and congregations that engaged in the marriage study, 50 percent did it through small groups, 40 percent through a prepared study, 20 percent utilized expert leaders and 20 percent primarily engaged in prayer.

“Only 8 percent used Bible study as the basis for their study, which is kind of disturbing,” Hardwick noted.

The two years of study ― and the prominence of marriage issues at this year’s Assembly ― comes in the midst of a national debate on same-gender marriage that TWE Associate Director Charles Wiley called "the fastest moving issue in American history.”

Since the issue was first engaged by the 2008 Assembly, the number of states in which same-gender marriage is legal has risen from two to 19 plus the District of Columbia. “This issue, and public opinion about it, is moving faster than committees can meet and report,” Wiley said. “You don’t even hear about ‘civil unions’ (the moniker used in the special committee report that came to the 2010 Assembly from the 2008 GA) anymore, it's all ‘marriage equality.’”

The issue for the church--and particularly for pastors and sessions in those states where same-gender marriage is now legal--Wiley said, “is whether [W-4.9001] is sufficient for this time,” adding that if the PC(USA) changes its definition of marriage “it will require a lot more theological and liturgical work than simply changing ‘a man and a woman’ to ‘two persons’ in our constitutional documents.

Wiley said the study “focused on our worship liturgy for marriage because liturgy is so powerful in Presbyterian life.” The Book of Common Worship calls Christian marriage a gift from God, the full expression of love between people and a reflection of Christ’s relationship with the church and the human community.

Another conversation dealt with the MRTI recommendation that the church divest from companies that are practicing non-peaceful pursuits on the East Bank of the Jordan.

Elizabeth Terry Dunning, who led the conversation, said MRTI members have tried to engage Caterpillar Inc., Hewlett Packard, and Motorola Solutions but have been unable to sway them in their use of resources as tools for destruction of Palestinian territory.

The 220th General Assembly (2012) voted that, rather than merely divesting, the PC(USA) -- through the Presbyterian Foundation --engage in positive investments that will support the economic development of Palestine. The goal is to create “a just peace based upon two-state solution with self-determined government,” Dunning said.

The first is in microfinance loans, which are designed specifically to help women have the ability to become entrepreneurs and start small businesses that will give them independence and allow for the Palestinian economy to grow. The second is renewable energy, particularly solar. The last is in education, where they are truly thinking outside the box at Dar al-Kalima College of Bethlehem, where students are working to create futures for themselves and Palestine through disciplines within the arts.

“This is a question of conscience,” Dunning said. “We as stewards are liable and responsible for the human health and the human hurt of our investments.”