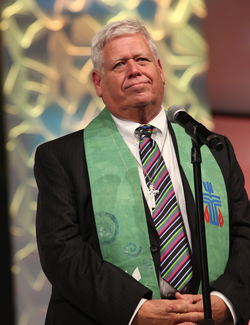 Heath Rada, a retired ruling elder who served the American Red Cross as CEO of the Greater Richmond chapter and president of the Presbyterian School of Christian Education, was elected moderator of the 221st General Assembly (2014) of the Presbyterian Church (U.S.A.) Saturday evening (June 14) on the first ballot.

Serving with him as vice moderator will be Larissa Kwong Abazia, Church of Forest Hills, a multicultural, multiethnic congregation in Queens, New York.

“I believe the role of the moderator is to listen carefully,” Rada said in a news conference following the election. “I will try to do my best to interpret the decisions of the Assembly.

“There’s a lot of anger out there. At some point when people are angry, they divorce, we’ll have to deal with that.”

During his speech, Rada displayed a t-shirt that said “Jesus loves you, but I’m his favorite.”

“That’s Original Sin into a sassy sound bite,” he said. “How easy it is to wear that t-shirt.”

But Rada accepted Jesus Christ as his personal savior when he was 12-years-old. Ever since, he said, Jesus has continued to open doors and show new dimensions. “Leaders of many faiths have helped me to see that truth can be understood from many different angles. People who were sure they were Jesus’s favorites had their minds expanded.”

His call as a ruling elder was to develop mediation skills that could be used to make life better. He put these to use in his service with the Red Cross, working to help make peoples lives better in the wake of Hurricane Katrina.

“We have to challenge those who want to be favorites. In too many instances we forget the power of the gospel. We need to abound in hope and get rid of this message,” he said.

All three candidates emphasized the need for building relationships and having conversations that reconcile across divisions. When asked what place in the PC(USA) of the future they see for evangelical and more conservative folk, Wilkinson said, “We can all disagree with each other, and yet we can find our common life in our baptism, Bible study and fellowship together. A bird needs two wings to fly.” Allen finds common ground among Presbyterians through evangelism tied with justice. Rada emphasized that “the love of Jesus Christ as Lord and Savior is the foundation that unites us.”

Rada said about congregations deciding to leave the PC(USA), “We need to find ways for people to live together and disagree. A mediator can help find significant common ground. “ Allen spoke about her intense feelings of sadness when people choose to leave. Wilkinson hopes that presbyteries have not only guidelines and principles, but relationships at the deeper level.

All of them spoke about their hope to welcome back those who have gone to other denominations in the future.

Responding to a question regarding what gifts the candidates had witnessed LGBTQ people bring, Rada said, “Let’s allow people to be God’s children, and not have to focus on labels.”

Wilkinson said, “Their gifts are no different than the gifts all people bring. We need to discover that God doesn’t gift a group of people one way, and a different group of people another way.” Allen spoke about remembering people have been isolated and excluded.

The group fielded questions on communication, the role of younger adults, the Belhar Confession, and their understanding of global partnerships.

On the role of young adults, Rada noted how many were present at the Assembly. “What a lot of people. Bringing us a new understanding of church. They need space to explore who they are. What they believe. We need techies. We need selfies.”

Rada is looking forward to a creative partnership with his running mate. He explained that he first declined to run because he didn’t think of his face as the face of our emerging denomination.

When he was introduced to Kwong Abazia, he decided to answer the call to run. “She’s everything I’m not when it comes to demographics. One of the joys of these past months has been getting to know her.”

Following his installation, Rada said, “I’ll do my best with Larissa beside me as an extraordinary partner. We’re going to give it everything we have. If I had the power, I would fix every single glitch we have endured tonight.”