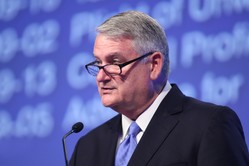 Among other things, the Assembly’s action calls for

Commissioners voted 465-133 to disapprove an overture from the Presbytery of South Alabama calling for appointment of a special committee to review PC(USA) policies on abortion and propose new policies if needed. The overture also urged a two-year churchwide “season of reflection” on the plight of unwanted children, “both born and not-yet-born.”

A substitute motion proposed by Teaching Elder Commissioner Jim Houston-Hencken of the Presbytery of Nevada eliminated the original overture’s call for a new study of abortion and simply urged “a two-year season of prayer and reflection on ‘the least of these’ children, both born and not yet born, who are unwanted by human society.” This motion also was voted down.

After rejecting an attempt to refer, the Assembly voted 425-170 to approve a lengthy paper from the Advisory Committee on Social Witness Policy titled “Tax Justice: A Christian Response to a New Gilded Age,” offering recommendations seeking a fairer tax system in the United States.

Ruling Elder Commissioner Dan Ponder, moderator of the Assembly Committee on Social Justice Issues, said the aim of the document is to “start discussion of a Christian framework for tax reform.” Ruling Elder Commissioner Debra Davies, a commissioner from the Presbytery of Maumee Valley, praised the paper. “In my experience as an accounting and business professional, this is the most thorough and in-depth analysis of the tax structure I’ve seen,” she said. “This is an opportunity for us to be a prophetic witness for economic justice in our country.”

However, Steve Watkins, a Teaching Elder Commissioner from the Presbytery of New Harmony, contended that the paper is based on false assumptions and “does not reflect the wider diversity and perspectives of our denomination.”

Several commissioners said they needed more time to read and digest the lengthy document, but a motion to refer it to ACSWP to bring back to the 222nd General Assembly (2016) was defeated.

An overture from the Presbytery of San Francisco calling for a two-year churchwide study to discern how to advocate for more effective drug policies in the United States, approved unanimously by the Social Justice Issues Committee, was pulled from the consent agenda for a vote by the full Assembly. When it came to the floor, two commissioners raised questions about the two-year duration and the $50,000 financial implication of the study. However, the measure ultimately was approved by a vote of 317- 260.

Most of the business items dealt with by the Assembly Committee on Social Justice Issues were placed on the consent agenda approved by commissioners on Wednesday. Among the items approved: