Turning church right side up 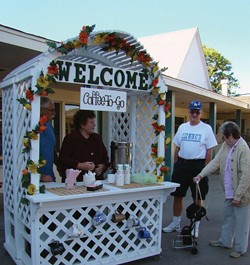 Covenant Presbyterian Church near Los Angeles International Airport is one of many congregations trying to figure out how to do church in the 21st century.

Started in the late 1940s, when the aerospace industry was beginning, Covenant quickly grew. “They opened their doors and people came,” says the church’s pastor, Cathy Chisholm. “By the 1960s they had over 1,000 people. They were bursting at the seams — had three worship services to make room for everyone.”

But, gradually, Covenant Presbyterian began to lose members. As the airport expanded, the community of Westchester, which Covenant serves, began to lose houses — and people. “We’re down to about 150 in membership now, with about 75 in worship,” says Chisholm.

Across the country, at First Presbyterian Church in Whiteville, North Carolina, the 115 people who gather for Sunday worship face different challenges.

Like Chisholm, pastor Joshua Bower felt that the church he serves in rural southeastern North Carolina needed to move in a new direction.

“You have to understand our cultural context,” says Bower. “The gospel here has been defined in one way: getting saved.”

Folks grew up in Whiteville’s primary image of the gospel, he says, depicted the world on one side, paradise on the other.

Bower and Chisholm found the help they needed in shifting their congregations’ focus — from inward to outward — in resources produced by the Presbyterian Mission Agency, through Evangelism and Church Growth ministries.

First Presbyterian used Engage, which helps congregations learn how to share their faith, follow Jesus, and serve their communities.

As Covenant was going through New Beginnings, it decided to start with “something small.”

So, on Christmas Eve of 2012, instead of going into the church courtyard to sing carols and light candles as usual, they went the other way — toward the street, where people could see them.

As they were lining up toward the street, a car drove by. Windows rolling down, it stopped, made a U-turn, and headed to the church parking lot.

The man and woman’s daughter had been in a serious auto accident that day. She was in serious condition, and at a nearby hospital’s emergency room.

“She told me how distraught they were,” says Chisholm, “how they’d been driving around looking for a church to pray in.”

Chisholm ministered to them that night and kept them in her prayers. Later she found out from a grateful mother that her daughter had recovered.

They’re doing other things now to strengthen relationships with those outside their church walls — like serving coffee to parents who drop their kids off at school, to bigger projects like hosting a resource fair, which helped some 300 people connect with 52 community agencies.

Reconsidering what ‘the gospel’ means

In Whiteville, North Carolina, First Presbyterian is also experiencing a new understanding of the gospel.

“From the moment I introduced it, Engage has been wonderfully freeing for us,” says Bower

“I played that first video [from the Engage online curriculum] of the bridge to nowhere; people were like, ‘Whew!’ They recognized it immediately as a critique [of] what we’d been doing.”

As they pondered this together and went deeper into Engage, they began to see that they had an incomplete understanding of the gospel.

“Yes, we’ve been damaged by evil,” Bower says. “We knew that. But we began to realize that we’ve been designed [for] good — restored to be sent as God’s healing agents in the world.”