Grace for refugees from Central America

"Why were you so good to us?" refugees ask Presbyterian volunteers 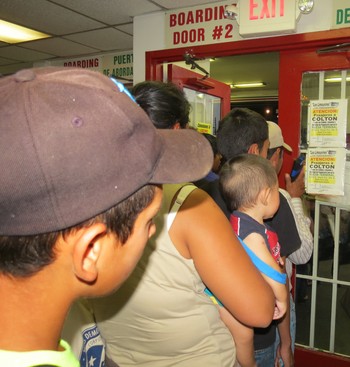 Some 2,000 refugees asked Presbyterians and other faith partners in El Paso, "Why did you care so much about making us feel safe?" —Paul Seebeck

Two years ago, Grace Presbyterian Church didn’t exist. In its place were three congregations—all worried they might not survive.

Now, after merging in November 2012, they are together and engaged in a much larger survival story of some 2,000 refugees from Central America.

How they and Grace ended up together—and what they did for each other—is remarkable.

“You don’t forget seeing the children’s mouths,” says Grace member Ruth Aguirre. “Full of sores from dehydration. They’d had no food and water for days at time in getting here.”

The humanitarian crisis playing out here, and in other border towns, was precipitated by an upsurge of families and unaccompanied minors from Central America arriving on the South Texas border.

Immigration officials responded by sending overflow to other parts of the U.S.–Mexico border for processing. Planes carrying 140 refugees at a time began to arrive in El Paso in early June.

As they arrived, Immigration and Customs Enforcement reached out to Ruben Garcia, director of faith-based Annunciation House.

“They had 34,000 beds, but none for women and children,” says Garcia, who has been working at the hospitality house for immigrants and refugees for 37 years.

“They wanted to send the women and children that were going to be released to us.”

Initially, Catholic churches were shouldering the bulk of the burden of caring for the refugees. They provided shelter, clothing, food, medicine, and showers and helped the refugees arrange transportation to relatives within two or three days. 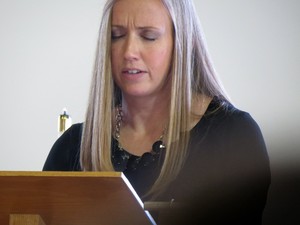 Jessica Vaughan-Lower challenged Grace Presbyterian to get involved in the refugee crisis, saying "you are faced with a rare opportunity to share the love of God through Christ—please do not delay in responding to this need." —Paul Seebeck

Members of Grace talked about that email and forwarded it to others they knew.

Soon “a fraternity of Christians” began to respond “to the needs of these people,” says Grace’s Bill Rose. “That’s when it began to transcend everything. Even those political canyons no longer divided us.”

Coordinator of the site, Rick Snow, a Methodist, says caring for the refugees has caused him to “rethink everything.”

“One woman said she was traveling with a six-year-old nephew, who was detained. I’m visualizing that—a kid taken from his family— I’m not okay with that.”

The volunteers heard harrowing stories from the women—stories about being afraid for the lives of their children; about paying thousands of dollars to smugglers to help them get on the train; about drug cartels stopping the train, taking some refugees off to hold for ransom—or to be killed.

El Salvadorian women told the volunteers their country is one of the most dangerous in the world, because they “lost a generation.” Today's young men grew up in refugee camps—and lived through civil war—when all the men were off fighting.

In the 1980s, bloody revolutions were underway in Nicaragua, El Salvador, Honduras, and Guatemala.  The U.S. supported authoritarian regimes—dictatorships—in these countries, as part of its Cold War policy against communism.

As Grace challenged the congregation to respond to the current humanitarian crisis, member Christina Fenstermacher—a Mexican-American—says her heart “was racing.”

“Never was I more proud to be part of this church. For a long time, we were the white churches, talking with great discomfort about outreach to Hispanics.”

Fenstermacher volunteered to set up sleeping cots at one of the sites.

“The fire chief saw me. ‘Is this all the people that are coming?’ he asked. He called his fire station, which came to unload the cots for us.  These public servants were extraordinary.” 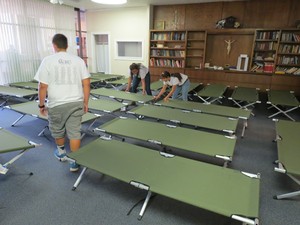 Woman and children refugees were grateful to rest on cots like these in El Paso—after sleeping on concrete floors, when they first arrived —Paul Seebeck

Pouring milk on Cheerios and mashing bananas to make “soft food” so young children could eat will stay with the volunteers for a long time.

“Once they saw other children eating, they came asking for food,” says Aguirre, who finds herself strangely grateful these days.

“I’m so thankful for an ordinary day with family and relatives, even a run-of-the-mill day. I have expanded gratitude for the opportunities I’ve been given by our country.”

Bill Rose is more appreciative too.

“If you had that many Americans in one room, you would have to hire a crew to pick the water bottles off the floor,” he says. “This young mother with a toddler on one leg, a baby on her arm, would pick up trash off the floor.

During feeding she’d say, ‘I’m just going to eat what my child doesn’t eat.’ We said, ‘No, you get a plate too—those women, they’re doing for their children.’”

The five sites set up through Annunciation House are empty now. The women and children are being sent to detention centers.

Which bothers Snow, based on what the refugees told the volunteers at Tobin Park.

“Don’t you dare compare how we were treated at McAllen station in South Texas to here,” they said. “There we slept on concrete floors. Here you were good to us. Why did you care so much about making us feel safe?”

“It’s kind of bittersweet,” says Catholic volunteer Leticia Montoya, who was in charge of clothing at one of the sites. “We get a breather but it saddens me because I don’t know what’s going to happen to them.” 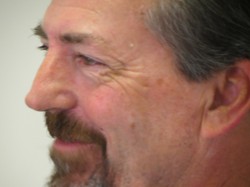 Rick Snow says faith volunteers treated the refugees like family because "they are God's children—like we are." —Paul Seebeck

Vaughan-Lower says this is one of those moments in life when something happens that shows you who you are.

“At Grace we no longer wanted to be disconnected from our community,” she says. “We prayed, we wrote checks, we did something about this crisis.”

It’s what Grace, and the faith community, holds on to—they did what they could to live out the gospel.

“They came with nothing but their clothes and paperwork,” says Snow.

“They were tired, hungry, thirsty, scared to death. We gave them food, clean clothes, a place to shower and sleep. We treated them like family, because they are God’s children, like we are.”

“Compassion still outweighs the horror humanity inflicts on each other,” says Aguirre.

“I was stuck thinking, ‘How can people do what they do to people?” adds Grace’s Frieda Voeks. “This outpouring, from all kinds of people and churches, has been uplifting—it has restored my faith in God and humanity.”

Editor’s note: While the situation has settled a bit in El Paso, the humanitarian crisis continues to play out in McAllen, Texas, and other cities and towns along the U.S.–Mexico border. Presbyterian Disaster Assistance continues to work in partnership with our presbyteries and churches and ecumenical partners in these border towns to help meet needs and alleviate some of the human suffering. Click here to donate to PDA's refugee emergencies fund. — Jerry L. Van Marter