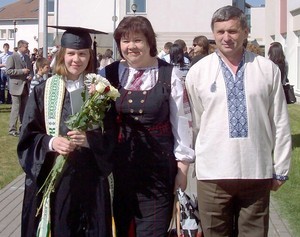 Iryna Sychyk with her parents at graduation. —courtesy World Mission

Ukraine is much on our minds.  As we hear from you, we know that the U.S. media carries a bewildering number of stories of what is happening in Ukraine — and what these complex geopolitical events might mean for the future.

We think it is important to hear the voices of our students at LCC International University, our mission partner, as they try to understand these events. Iryna Sychyk (LCC ’09) sent this assessment:

“This is what I can say about events in Ukraine: Unfortunately, Ukraine has been historically divided into western and eastern parts. At the time of this serious conflict, the differences can be seen very clearly. My family lives in the northwestern part of Ukraine, in the city of Rivne.

“The developments in these areas are much more peaceful and calm than in the east of Ukraine. All the reasons aside for the breakup of violence in the eastern regions of Ukraine, people's lives are really affected. Residents there are in serious danger in terms of their lives and well-being as military operations are being actively pursued against armed separatists (those who want some eastern regions separated from the country). People's property is being damaged, cars stolen. There are instances of looting and all kinds of crime that happen when there is no public order. Some people are forced to relocate to the central and western parts of Ukraine. In my town Rivne we have already received families fleeing from the Crimea, annexed by Russia.

“The majority of Ukrainians want a united and democratic Ukraine. I would say the younger generation that has known little of the Soviet past is very much committed to this goal. Numerous initiatives are coming forth, often championed by young Ukrainians, to improve the country's development, whether it be lobbying for long-needed reforms, screening those in power for corruption involvement, creation of transparent and high-quality media, or practical help to those who are undergoing treatment and to the families of those who died in the protests. These events have really produced a change in the attitude among Ukrainians, and the younger ones are very energized to make everything work this time.

“Concerning the role of churches in these events, their stance has of course been to support people in these struggling times. Church leaders have been and are regularly present at all the hotspots. Prayers for peace and reconciliation are being regularly held both in churches and in the wider community. During the winter months of protests in Kyiv (the capital city), churches hosted people. Now counseling services are being provided. Church leaders notice that people display a strong hunger for God in these troubling times, looking for hope and direction in their lives.”

Another LCC graduate, Tsvitana Chudovets (LCC ’13), is studying at the John Jay Institute in Philadelphia. An article from the Institute featured her testimony: 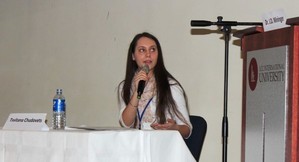 “Tsvitana’s strong faith in a faithful God who uses flawed but willing people is a thread that runs throughout Tsvitana’s life, from her vision for her role as a leader in business to her hope for the future of her country. Though recent events in Ukraine’s conflict with Russia over Crimea concern her, Tsvitana’s clarity for the direction of her country’s future has been renewed by her studies at the John Jay Institute. She speaks about her country with both conviction and affection, displaying that paradoxical combination of dissatisfaction that breeds transformation, and love that finds something valuable enough to be worth changing.

“‘As a Christian I do have hope, no matter what the circumstances are or will be. The belief in God’s sovereignty and providence, that all the events in history shall ultimately promote the glory of God, is my hope and comfort in this difficult and uncertain time.…As Ukraine is recovering from its Soviet past and moving towards European integration, it is essential for my country to realize that the true liberty it strives for is possible only if we, as a nation, preserve and strengthen our religious foundation.’… As she looks ahead, Tsvitana demonstrates her characteristic trust and malleability in the hands of the One in whose service she is enlisted: ‘Nevertheless, I am asking God to help me be always sensitive to His voice, pursuing His will and not my own.’”

The young Ukrainian students at LCC are both perplexed by events back home and hopeful that positive change will occur. Anne Applebaum, a popular U.S. political commentator, is not so sanguine.  She wrote recently about meeting “young Ukrainians who were heartbreakingly enthusiastic about the idea they might, someday, live in a different country.  I didn’t have the heart to tell them that I didn’t know if they ever would”

A commentator on church affairs in Russia and occasional contributor to Presbyterian News Service, William Yoder, a former colleague at LCC, points to the complex and fractured nature of the church’s response to political events in Russia, Ukraine and Crimea.

He offers a cautionary tale about the church: The churches need to support modest, sustainable models for development that allow all of God’s people a chance to survive. Is poverty a greater problem than wealth? The world needs an economic growth which does not make certain peoples even poorer.” He advises that many analyses are contradictory: “Assessments continue to gyrate wildly. Commentators describe Russia as both terribly weak and terribly aggressive.” So where does hope lie?

The apostle Paul lived in the context of a powerful empire infused with a dominating imperial cult of Caesar as a god figure to be worshipped and feared. What was Paul’s response? He promoted a new king, more powerful than all other gods. He warned of the “lawless one” but assured us that it will be destroyed by the Lord Jesus (2 Thess. 2:8).

And even more important, it seems today, is Paul’s admonition about our adversaries: “Do not regard them as enemies, but warn them as believers.” (2 Thess. 3:15).

It has been our privilege and high calling to be part of the faith journey of Iryna and Tsvitana, as have many others of our colleagues at LCC and beyond. It is clearly God’s Spirit that has nurtured these young people. We have three more years to go on our mission term—to 2017. The next three years will be a challenge for us—to have the needed energy, patience and faith.

Over these past 13 years we have learned the value of long-term relations — for our students and for us. This is the justification for our work as teachers here at LCC. Our prayer is to be “steadfast in our witness; patient in our hope.”  We invite you to participate in the lives of these young people through prayers, letters and faithful giving.  It is your financial support, after all, that keeps us here as teachers and witnesses to the hope of the gospel.

Eric and Rebecca Hinderliter have been serving at LCC International University (formerly Lithuania Christian College) in Klaipe'da, Lithuania, since 2001.