Displacement and eviction in Colombia 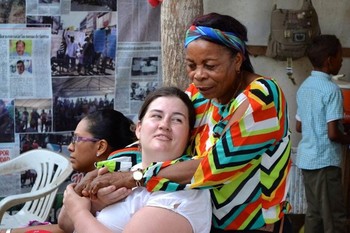 That’s the question people in the United States usually ask when they learn I live in Colombia. My answer: Yes and no.

No, I am not fearful for my personal safety. For oustiders, Colombia’s current tourism slogan may be accurate: “The only danger is wanting to stay.” The generalized violence that plagued the country over a decade ago has diminished, and the incidence of kidnapping has declined dramatically.

But at the same time, the answer is yes. There continue to be dangers and tensions that warrant our prayers, advocacy and concern, and these predominantly affect the most impoverished and marginalized members of Colombian society.

The largest category of victim in Colombia’s decades-long internal armed conflict is that of internally displaced persons. Displacement occurs in a variety of ways, but often involves the violent appropriation of and being farmed by small rural landholders, making it available for lucrative commercial uses such as cultivating palm oil.

The result is this: well over 10 percent of Colombia’s population has been internally displaced ― turned into refugees in their own country. Displacement in Colombia emerged as a serious concern in the 1980s, and the ranks of the displaced continue to swell.

The Presbyterian Church (U.S.A.) and the Presbyterian Church of Colombia (known as the IPC, for its Spanish initials) have grown together in ministry since 1856, when the IPC was founded by a mission from U.S. Presbyterians. Today, an important part of our joint mission and witness as the body of Christ is to seek reconciliation in a society where very few can recall days before the conflict began.

In many respects my identity as a pastor has been shaped by the IPC and its ministry with the displaced. I offer you here a few stories, in the hope they might touch and disquiet your heart.

As a young woman, Marisol lived in the Uraba region of Colombia, an area of the country blanketed with banana plantations. Laborers seeking improved wages and working conditions faced threats of intimidation. One day, 72 people from her town were killed and loaded onto a truck, like so many crates of bananas. She was displaced for the first time that day, a violent uprooting that would be relived twice more before she settled in El Tamarindo, where we met.

Marisol and her husband are now part of a cooperative of displaced farmers. Members of their community have spent the past 12 years living on and farming land that was vacant and unclaimed when they arrived and settled. They had hoped to acquire the land legally through government assistance available to displaced persons.

A few years ago, however, owners appeared with a title to the property. You see, El Tamarindo is situated in a duty-free zone, established near a port city to facilitate the swift and steady increase in international commerce projected to accompany the implementation of Colombia’s new free trade agreements with the United States and Europe.

Property values have increased enormously in the area, as it is suddenly attractive and strategic for business use. Vast warehouses are cropping up to store commercial goods and construction materials, in some cases obliterating food production and the small farm lifestyle.

Life in El Tamarindo has been simple yet livable for its residents ― or at least it was until the land was sold out from under them. What they seek is simple: the security and confidence of land to call their own. The Colombian government’s rural development office is working with them to purchase land in a more remote area, but the steps involved in that bureaucratic process involve significant delays, and the outcome remains uncertain.

Meanwhile, Marisol and the rest of the community at El Tamarindo find themselves once again pushed off the land they call home. One day, when I visited with a few members of the IPC’s North Coast diaconal committee, Marisol wept as she showed us the land where she had lived ― house and crops all bulldozed and burnt.

“All of this lifetime of violence and displacement I have borne, and now I am suffering still more, same as it has always been. Where are the things the government has promised us? What is this news that peace is coming to Colombia? Where is our peace? Have I had peace, living in need since I was 18 years old? I’ve never been able to rest, never eat a decent meal in peace. It’s always been like this, running, crying, shouting, everything. What a disgrace, to be a Colombian.”

In the IPC’s North Coast Presbytery, the diaconal service committee offers pastoral presence, assistance with small agricultural projects and connections to legal resources for groups of displaced persons in the region. This is one expression of the church’s ministry with the displaced, which has taken different forms over the years.

Diego Higuita currently serves as executive of the IPC, but he started out in ministry in his small home town in the mountains of Colombia’s Antioquia region. He tells this story about a transformative moment in ministry for him, nearly 20 years ago now:

The woman had lost her farm in the beautiful mountain valley in Colombia’s countryside. Her husband and older children had been killed by paramilitary soldiers, falsely accused of collaborating with the guerillas, and now her life was in danger, too. In fear, with nowhere else to turn, she found herself, with her surviving child, on the pastor’s doorstep.

Diego was working part-time as the ambulance driver from his small town to the state capital. He was well-acquainted with the army and paramilitary checkpoints along the only road through the mountains, so when the woman asked him to smuggle them out, he knew that he would be putting himself and his own family at risk.

If the ambulance was stopped and the back doors opened, driver and passengers would likely be killed. The thought of it terrified him, but he did not know how to refuse. He asked the woman to return after dark, and they set out in the ambulance with nothing but a small bag of clothes for the baby and a prayer for protection.

Thanks be to God, they passed through safely and reached Medellin.

“Where shall I take you?” he asked.

“Under that bridge will be fine,” the woman replied.

She knew no one in the city, was simply hoping that the anonymity of the crowd far from home would offer her and her surviving child a chance. Diego had nothing else he could offer her. So he did as she asked, and left them there to wait out the rain and seek their fate in the morning.

As he returned home, Diego gave thanks for safe passage but lamented having nothing better to offer this woman. Knowing that she was one among thousands, he shared his concern with the church. Soon, he and others in the IPC were offering an array of services to families displace by the violence of Colombia’s armed conflict.

In other cases, sisters and brothers in Christ have found one another and started new congregations, patching together community in makeshift towns that spring up wherever displaced and impoverished people from different areas converge.

In each situation, the church is a source of hope and healing for its members. Lives battered and bruised by incomprehensible violence find strength in joining together to build something new. Women bake empanadas over wood fires and sell them to finance the church.

A congregation cultivates a fishpond to raise food and funds for its members. Men plant fast-growing trees hoping sales from the lumber will support retired pastors. Even the humblest congregations offer after-school support to children from the neighborhood. And, almost every day, there is worship.

One local church member has a gift for song-leading. On a recent visit, I learned this song from her home state of Choco:

I have a new ministry with music and joy

Love abounds in the churches of Uraba, and the singing often continues well into the night, filling it with hope and confidence in God’s presence even in the midst of uncertainty. These churches are growing and multiplying, sharing in the movement of God’s Holy Spirit. They find strength and an affirmation of faith in their connection to the broader church in Colombia and to the world.

As Bernardino Lopez, moderator of Uraba Presbytery, says, “We learn we are not, in fact, a small church. We’re a very large church.”

We are the body of Christ together. Predecessors of the PC(USA) founded the Presbyterian Church of Colombia in 1856, and our two communities of faith have learned and grown together ever since. It takes all of our gifts , along with a willingness to work with courage and steadfastness, for us to respond faithfully to God’s call in this hurting world.

Promises of peace arising from negotiations between the Colombian government and guerilla forces are a hopeful sign, but an end to hostilities will not bring wholeness and restoration to the displaced and other victims of armed conflict.

The churches in Colombia are discerning the ways that they can be agents of reconciliation in a hoped-for “post-conflict” time. Let us pray and work for a peace worth living.

Sarah Henken lives in Barranquilla, Colombia. The Andean countries of South America where she serves include Boliva, Peru, Colombia and Venezuela. This story originally appeared in “Reformed Communique,” the magazine of the World Communion of Reformed Churches.