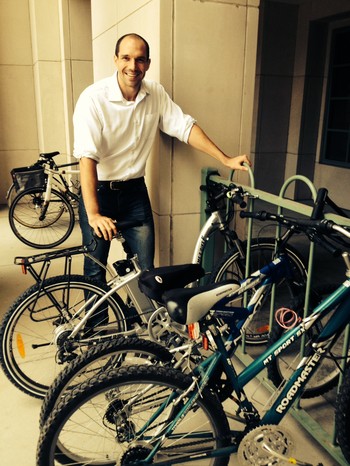 For many food pantries in the United States, keeping quality sources of protein on the shelves is a problem. Smaller pantries often lack the refrigeration space and buying power to store and purchase large quantities of meat. Larger pantries are more likely to get large donations of protein, but those donations are often of lower quality, like breaded fish sticks.

To raise awareness about and money for food pantry protein needs, the Presbyterian Hunger Program and the Presbytery of the Redwoods are partnering on a project called Pedal for Protein. From Sept. 20-25, the 12 or so participants on this 360-mile bicycle ride across the presbytery will raise money for local food banks so that they can buy protein.

Patty Sanders, the presbytery’s Hunger Action Enabler and a triathlete, got the idea for the bike ride after hearing from a church food pantry that was struggling to afford protein.

“That really bothered me a lot. That’s not healthy for adults, let alone kids,” she said. “You have to have a certain amount of protein in your diet for brain function.”

So Sanders approached her presbytery and the hunger program about a bike ride. She said the response has been “awesome.” The Rev. Robert Conover, the presbytery’s stated clerk, will participate in the ride, and congregations along the way have offered the riders places to sleep and are selling fair trade products as fundraisers.

The goal is to raise $20,000 for two local food banks, which supply food to smaller, grassroots food pantries.

While most of the riders will be from the Presbytery of the Redwoods, one staffer from the Presbyterian Hunger Program will also participate. Bryce Wiebe, associate for Enough for Everyone, will attempt to raise $10,000 for the hunger program’s national and international grant projects.

One such project is Children of Joy, a program in the Democratic Republic of Congo designed to reduce malnutrition among children. Through agricultural development and preventative health care, the Presbyterian Community Church of the Congo and the hunger program are ensuring that children have enough food for today and the rest of their lives.

“We look at ways for people to eat in healthful and complete ways,” Wiebe said, adding that community gardens and sustainable agriculture are key tools of the hunger program.

At the churches the groups stays at along the way, Wiebe will speak about the hunger program and the One Great Hour of Sharing offering, which helps fund the program. Raising awareness about hunger and the need for protein is another goal of the ride, Sanders said.

“I’m a Hunger Action Enabler and I didn’t realize that some of these small pantries are struggling to feed people,” she said. “Whatever we raise is going to help grassroots food pantries.”

To donate to the Presbytery of the Redwoods’ riders, click here.