Home News Facing up to Ferguson

Facing up to Ferguson 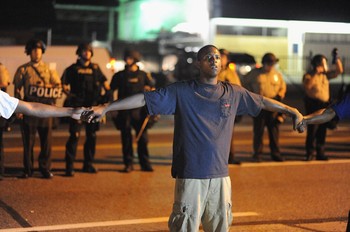 A protester joins hands with community leaders to form a barrier between police and demonstrators in an attempt to defuse escalation between the two during a peaceful protest in Ferguson, Mo. —New York Daily News

Faith communities can and should play a larger role in calling for justice and leading difficult conversations about race, said two retired Presbyterian Church (U.S.A.) pastors in Ferguson, Missouri.

Since the Aug. 9 killing of unarmed teenager Michael Brown by a police officer, the country has been focused on Ferguson and the confrontations between civilians and law enforcement there. Underlying the protests and marches is the complicated and painful state of race relations in Ferguson — a situation that could easily occur in many communities across the country, said the Revs. Ellie and Carleton Stock.

“People are really dismayed at the use of such force in situations like this,” said Ellie Stock. “People understand the racism underneath and that it’s a long-term issue.”

The Stocks are retired co-pastors of Northminster Presbyterian Church in Dellwood, Mo., which borders Ferguson. Northminster is now merged with First Presbyterian Church of Ferguson. The Stocks remain active in race relations work and a local ministerial alliance made up of several denominations that coordinates worship, education and social services for the community.

Since the shooting, the alliance is working with another group of local clergy, most of whom are black. That group is taking the lead in organizing marches and vigils.

“Faith communities have been really out there,” said Carleton Stock. “Black clergy have really been leading the way. They can really play a large role. There’s a lot of respect for clergy in the black community.”

PC(USA) churches, which are predominantly white, should join with black communities of faith and have the admittedly difficult conversations about racism and white privilege, the Stocks said.

“We’re hoping that this event will catalyze some of these conversations,” said Carleton Stock, who served on the Presbytery of Giddings-Lovejoy’s Dismantling Racism and Privilege Ministry Team. He acknowledged that these conversations can be hard and will take years. The team is working to organize a way to reach out to congregations to talk about these issues, and the willingness of the congregations varies.

That combination of dialogue and action is important, the Stocks said, repeating the refrain often heard from protesters in Ferguson: “No justice, no peace.” 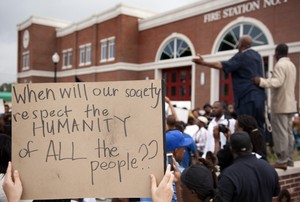 A peaceful rally for justice in Ferguson, Missouri —Associated Press

In the past several years, the demographics of Ferguson have shifted so that the town is now about two-thirds black and one-third white, but the leadership remains largely white, the Stocks said. The police force, which is mostly white, patrols communities of color all the time, contributing to those communities’ distrust of law enforcement and uncertainty that they’ll be treated justly, the Stocks said.

“It’s going to take a while, but we trust in the resurrectional spirit that can come out of this,” Ellie Stock said. “We’re calling not only for calm but for new ways of working as community.”

A statement from PC(USA) leaders calls for “calm and prayer as justice is sought and righteousness pursued.”

The Rev. Landon Whitsitt, executive and stated clerk of the Synod of Mid-America — of which Ferguson is a part — released a statement calling the PC(USA) to stand in solidarity with the people of Ferguson and to “‘witness against and strive against’” systemic, institutionalize racial injustice.

“We must as the possession of God…stand where the Lord stands, namely against the injustice of the wronged.” The statement read. “Sisters and Brothers, we must stand arm in arm with the people of Ferguson. Black bodies matter and our white bodies will signify that the killing of black bodies is unacceptable.

“If you live in or around St Louis please come and walk with the protestors. Listen to their cries, and join them in the call for justice.

“If you live farther away, find the members of your own community who are standing against this injustice. Listen to their cries, and join them in their own call for justice.”