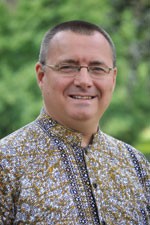 “It’s hard to believe that this bright light has gone out,” said the Rev. William J. Carl III, president and professor of homiletics at Pittsburgh Theological Seminary. “In a very short time, Jannie Swart made an enormous impact in this community. His passing is truly a loss to the seminary, the church at large, and the world. We will not see one like him again anytime soon.”

Before coming to the seminary, Swart served as pastor of Second Presbyterian Church in Oil City, Pa. He was a graduate of Luther Seminary (Ph.D. in Congregational Mission and Leadership) and University of Stellenbosch in South Africa (B.Th., B.A. Philosophy, B.A.).

Swart previously served as senior pastor of Fontainebleau Community Church in Johannesburg, South Africa. There he led a Dutch Reformed mega-church during their post-apartheid attempt to become more multi-cultural, multi-racial, and multi-lingual.

Before that, Swart led a new church development among college students at an emerging technicon campus in Cape Town while serving at Tafelberg Dutch Reformed Church in Cape Town, South Africa.

Additionally, Swart worked as the national director of training and development for the Democratic Party in South Africa, a new, emerging political party (merger of three different political parties) in opposition of the apartheid policies of the National Party (prior to the release of Nelson Mandela, the unbanning of the African National Congress, and democracy).

Swart worked with St. Matthew’s Episcopal Church in St. Paul, Minn., as director of intergenerational faith formation; the Church Innovations Institute in St. Paul, as the director of partnership for missional church; and the Allelon Foundation in Boise, Idaho, as the research assistant for Allelon’s Mission in Western Culture Project.

He was involved in several research projects. His publications include articles, book chapters, and book reviews. Most recently his article “Via the Broken Ones: Toward a Phenomenological Theology of Ecclesial Leadership in Post-Apartheid South Africa” appeared in the Journal of Religious Leadership. Swart previously taught at Luther Seminary, Agora College, and Rochester College.

He is survived by his wife Mari and their two children, Suné and Janco.

Editor’s note: I had the privilege of hearing Jannie Swart speak at the recent Evangelism and Church Growth Conference of the PC(USA) in August. Here is the article on that presentation:

Evangelism conference called to faithfulness in response to God’s

ST. PETE BEACH, Fla. – Turning to face a large communion font in the center of the room, some 500 participants in the 2014 Evangelism and Church Growth Conference of the Presbyterian Church (U.S.A.) embarked on a week-long journey together here to find new ways to renew their baptismal vows to spread the good news of Jesus Christ in their communities.

The gathering runs from Aug. 10-14 at Tradewinds Island Resort here.

Through worship, plenary presentations and countless workshops, conferees will address the theme “Go. Disciple. Live.” Opening worship began with the reading of Christ’s great commission from Matthew 28 in Korean, Spanish and English. Participants come from all over the PC(USA) and from partner churches on several continents.

“Evangelism is all about the water of baptism,” said opening keynoter Johannes G. J. “Jannie” Swart, a South African pastor who is associate professor of world mission and evangelism at Pittsburgh Theological Seminary. “Christians are like little fish in water and nothing can take the water away from us.”

All authority has been given by God to Jesus Christ, the Bible tells us, Swart reiterated. “We have to recognize this bigger picture that we are a part of. Otherwise we will be overwhelmed by our own weaknesses and failures.”

We cannot be serious about worship and evangelism “unless we’re serious about the authority of Jesus Christ and that Jesus is Lord of every square inch of this earth, regardless of whether the world recognizes it or believes it,” Swart said. “We don’t have to defend Jesus – Jesus doesn’t need us to do that.”

What makes it so difficult for us to believe that all power and authority rests in Jesus Christ? Swart asked. “It’s the correlation between promise and faith, he answered. “God through Christ is doing all these new things and we’re the stupid ones who don’t see it.”

This week, Swart said, conference-goers “need to practice two laughs” in response to our inability or unwillingness to believe the promises of God.

“First, I want you to laugh the laugh of Sarah,” he said. “Abraham obeyed when he was told to go to a place he didn’t know where because he considered God faithful who had promised.” God’s promise was so incredulous that all Sarah could do was laugh.

“Your strategies and tactics will not substitute for faithfulness,” Swart said, “and you should feel so stupid if you think they will that about all you can do is laugh.”

“You cannot stand by these baptismal waters and believe how stupid the world is to not think that all power belongs to Christ,” Swart said. “When some guru shows up and tells you he knows how to fix your church, laugh at the foolishness of those who think it’s up to them.”

The task of conference-goers, Swart said, “is to go back and help your congregation see the new things God is doing in the world that we are called to participate in right in our own neighborhoods… the church is not ours. God will continue to be faithful and gather people for His church – the question is: ‘Will we be part of it?’”

When we are caught up in our own stupidity and the world’s stupidity, Swart said, “all we can do is laugh and recommit ourselves to faithfulness in the face of God’s promises.”