Home News No reconciliation, no peace

No reconciliation, no peace 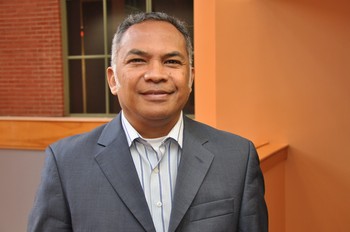 Twelve international peacemakers from around the world are visiting congregations, presbyteries and colleges of the Presbyterian Church (U.S.A.) Sept. 19-Oct. 12.

They are sharing their stories about church-based ministries in their countries that seek peace justice and pursue peace in the name of Jesus Christ. This year’s international peacemakers come from Colombia, Egypt, Ethiopia, Jamaica, Madagascar, Malawi, Mexico, Palestine, the Philippines, Russia, South Sudan and Syria.

The International Peacemaker program is sponsored by the Presbyterian Peacemaking Program.

The Rev. Lala Haja Rasendrahasina has served as president/moderator of the Church of Jesus Christ in Madagascar since 2004. Madagascar has faced political turmoil since 1972, resulting in poverty, violence, crime and skyrocketing unemployment. Religious leaders, including Rasendrahasina, have been called upon to mediate between the major politicians in their country to resolve the crisis.

What is the most important situation in your country that you will be addressing?

How are the faith communities trying to address this situation?

In 1991 the churches stood up and started mediating the crisis between the politicians ― a new constitution came out of that. In 2002 there was another crisis and the churches mediated that one, as well. After another crisis in 2009 which overthrew the president elected in 2002, the churches again stood up, this time thinking about reconciliation, not mediation.  A new president was elected last year and now we’ve been invited back because they keep getting stuck.

What peacemaking lessons from your situation are you trying to communicate to U.S. Presbyterians?

We’re not giving you any lessons ― what we’ve experienced is a lot of hard work. Most politicians belong to the church and they say it is very difficult to be a Christian and a politician at the same time. We believe that each congregation has to shepherd their own members. It is a heavy burden.

What is the primary message you want to communicate to U.S. Presbyterians about your country?

We need the support of the PC(USA) ― prayers, people, resources ― in our fight for reconciliation. The PC(USA) is well-positioned because of its presence at the United Nations and in Washington, D.C. This can be very important to us because, without biblically and theologically based peace and reconciliation there can be no justice.