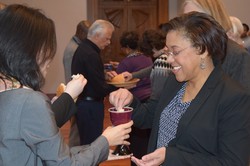 Presbyterian Center staff in special worship service to witness to the love of God in the life of Dr. Martin Luther King, Jr. —Kristena Morse

“For God did not give us a spirit of timidity, but a spirit of power, of love, of self-discipline.” 2 Timothy 1:7

Fifty years after the signing of the Voting Rights Act of 1965, staff from across all six agencies of the Presbyterian Church (U.S.A.) came together Wednesday during a special worship service to witness to the love of God in the life of Dr. Martin Luther King, Jr., a martyr to the faith, in the cause of justice, whose birthday is being celebrated today in a national holiday honoring King.

The service drew attention to issues of injustice and oppression and to the need for the church to play an active role in working toward a resolution. It also lifted up former leaders in the church who have helped advance the fight for racial justice, including Edler G. Hawkins, moderator of the 1964 General Assembly, and Thelma Davidson Adair, moderator of the 1976 Assembly.

“Despite these battles, the problem of racism continues and confronts every age and every generation,” Sera Chung, associate for gender and racial justice, said during the service. “Even today, the non-indictment decision made in the death of Michael Brown in Ferguson, the killing of Eric Garner in New York, and the deaths of others like Tamir Rice, Ezell Ford, Kajieme Powell, Aura Rain Rosser, Vonderitt D. Myers Jr., Akai Gurley, Renisha McBride, John Crawford III, Cary Ball Jr., and Trayvon Martin seemingly indicates that culturally, politically, and morally our society often places black lives as less worthy compared to others.

“Even today, college campuses are infected by subtle racism and sexism under the seemingly thriving veneers of diversity, and our cities are increasingly becoming gentrified, reinforcing residential segregation. But what is more tragic is the privilege-driven blindness that clouds our vision in identifying what is justice and what is not.”

Chung also noted that for the church, racism is not just a human problem but also a spiritual problem. “According to the Presbyterian Church (U.S.A.)’s antiracism policy Facing Racism, the church recognizes racism as sin and as a spiritual problem, in that the ‘forces that perpetuate racism through our society are rooted in spiritual realities that require us to call out to God for spiritual solutions,’” she said.

According to Chung, the church has a special task in dismantling racism. “We cannot let the systemic structures of injustice be disguised as ‘fairness,’ ‘process,’ and ‘rules’ that render the cries of the powerless as ‘irrational’ and ‘oversensitive,’” she said.

Gradye Parsons, stated clerk of the Office of the General Assembly, opened the service, noting, “We come from different cultures, different backgrounds, and churches across the region, but are all committed to the right for which Dr. King fought: freedom for all people. Dr. Martin Luther King Jr. had a dream of unity and peace, justice and equality for all. In our coming together, may we also aspire to that dream. More than that, may we be moved to go beyond that dream and join the fight that can never end until all can say with the boldness of Dr. King’s inspiration, ‘Free at last, free at last, praise God Almighty, we’re free at last.’”