Southside Presbyterian is a model for the Church’s immigration response

Editor’s note: This is the first in the weeklong “Journeying in Hope” story series designed to spotlight the immigration issue from the vantage point of the United States-Mexico border, and to amplify the ongoing response of the Presbyterian Church (U.S.A.) and its faith partners. Also check out the “Journeying in Hope” video documentary.

When you visit Southside Presbyterian Church you feel the presence of the first century Christian church.

There is activity everywhere – small-groups meeting around the campus, meals being prepared in the kitchen, day laborers waiting to be picked up for work, and even someone living on the grounds. Most of what happens at Southside centers on the congregation’s deep-rooted commitment to love of neighbor and care for the stranger.

Dubbed the birthplace of the sanctuary movement and situated 60 miles from the U.S.-Mexico border, Southside is the epicenter of the Christian Church’s response to the United States immigration struggle. And Southside is, some assert, one of the best models for what the Church needs to do as the nation wrestles with immigration reform.

“Southside is the church I went to seminary for,” said the Reverend Alison J. Harrington, the church’s pastor. “They are people who are earnestly seeking to put their faith into action in their local community.”

Action for the diverse congregation founded in 1906 as a Native American mission church ranges from a program serving the homeless, to a center providing day laborers with a safe place to wait for work and be trained, to a ministry putting water out and providing medical supplies in the desert for migrants.

“Southside has a long history of social justice programs,” said Harrington, pastor there since January 2009. What makes the congregation especially unique also is its willingness to give physical sanctuary to people at risk of deportation by the U.S. government. 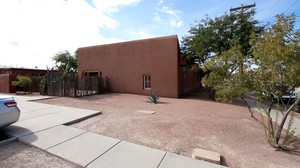 Right now Southside is home to Rosa Robles Loreto, a wife, mother and 15-year resident of Tucson who has a deportation order looming over her head. She has spent more than 130 days living in sanctuary at the church. She sleeps in a small room slightly larger than a standard work cubicle.

It’s not clear yet whether Loreto will benefit from President Obama’s late 2014 executive order on immigration. So in the meantime, she waits.

“There are 11.7 million undocumented neighbors in this country,” said Teresa Waggener, coordinator for Immigration Issues and an Assistant Stated Clerk for the Presbyterian Church (U.S.A.). Three-fifths of those people have been in the country more than 10 years, and they make up 5.2 percent of the workforce, she said.

“The situation that we’re in right now with immigration is very difficult. There are a lot of people who are in this country who have no status,” Waggener said. “However I am still hopeful, because right now there are community leaders and church leaders who are very active in advocating for better laws around immigration, and for stepping up and being the church to individuals who need assistance.”

Southside Presbyterian cut its teeth in immigration and sanctuary work under the leadership of its former pastor, the Reverend John Fife. The church and Fife were on the front lines of an interfaith effort that began when civil war displaced 1.5 million Central Americans in the 1980s.

Today Southside and other congregations within the PC(USA) are part of the new Sanctuary 2014 movement, a revival of that earlier effort. Coupled with that is a broad range of ecumenical work being done nationally to support the undocumented and reform the country’s immigration system.

“Sanctuary is not so much about finding refuge within four walls and a roof,” said Harrington. “It’s about finding shelter within the community.”

“Nationally, faith leaders and congregations are tired of feeling as if our elected officials aren’t doing their job,” she said. “It’s the job of Congress to pass immigration reform, and they have failed to do that.”

“So in the midst of the failure of elected leadership, religious leadership is standing up, congregations are rising to the occasion, and they are standing between deportation orders and families.”