Lifelong servant of the church, Elizabeth-Ann ‘Betty’ Nicholson, dies at 81 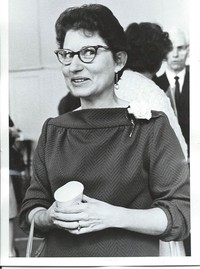 Throughout her life, Nicholson served the Presbyterian Church (U.S.A.) and communities across the country, from New York City to Lubbock, Texas, to Juneau, Alaska. She was a fourth-generation Presbyterian leader.

Born in China to missionary parents and educated at the College of Wooster, Nicholson began her professional life as a director of Christian Education at First Presbyterian Church in Little Falls, New York. After a brief stint there, she became an editor for the Board of Foreign Missions at the Presbyterian Church in the United States of America (PCUSA) offices in New York City, where she met her husband, the Rev. Dr. Robert D. Nicholson.

A memorial service will be held Saturday, February 7, at 2:00 p.m. at Lake City Presbyterian Church in Seattle, with a graveside service at 3:00 p.m. the following day at Woodlawn Cemetery in Snohomish, Wash.

Donations to the Betty Nicholson Memorial Fund, which will be shared between Presbyterian Disaster Assistance and Heifer International, can be made at any Wells Fargo branch.