Desert pathways to a future uncertain 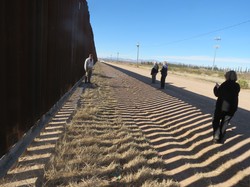 This is the second article in the series “Voices from the border and beyond.”

We—a motley crew of 15 Presbyterians traveling on the Voices from the Border and Beyond seminar—are getting quite an education.

The Presbyterian Mission Agency organized the seminar as a means for us to learn about the crisis that is sending thousands of people from Central America to the U.S. for refuge. We’re here to listen not only to the mission partners who care for the migrants but also to those who make the often-terrifying journey. Along the way, we’re learning about the complex issues that shape the crisis.

In Agua Prieta, at the Centro de Atención al Migrante Exodus (CAME), a migrant shelter that cares primarily for “guests” from Central America, we meet Miguelito. He’d come to cross the U.S. border after having already been deported once. Having seen how dangerous the trek has become, he’s not sure now which direction he’ll take, but calls our trip “migration in reverse, as we prepare to head south. “The only difference,” he tells us, is that “no one is trying to kill you.”

Violence is just one factor that has prompted many to flee their homelands. As we move along the U.S.-Mexican border, mission coworker Mark Adams puts the crisis into perspective. Adams is the coordinator of Frontera de Cristo, a binational border ministry. He explains that the crisis traces back to the 1990s.

“U.S. immigration policies changed drastically in the 1990s,” he says, because of the North American Free Trade Agreement. 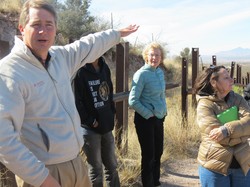 NAFTA “opened the borders for economic trade, primarily benefiting the elite,” he says. “It didn’t open the doors [borders] for labor.”

NAFTA allowed most goods to move across U.S., Mexican and Canadian borders tariff-free. In this new marketplace, Adams says, Mexican famers began to lose their subsidies. Struggling to compete, many lost their land; others lost their jobs.

So the workers began to move, economic migrants seeking work at a time when the U.S. economy was exploding. At the same time, U.S. immigration officials were doubling down on efforts to tighten the U.S.-Mexican border, building fences along border towns but leaving the mountains and desert open.

Those policies reflected a belief that “the mountains and desert would act as a lethal deterrent,” Adams says. “It certainly has been lethal, but not much of a deterrent.”

But the migrants weren’t uniformly welcomed. After 9/11, fear of “outsiders” intensified. In addition, a deepening global economic recession sparked outcries against hiring undocumented workers. Drug cartels’ growing influence in Mexico and beyond also raised new concerns about immigration. And other concerns surfaced as well.

“One of the reasons some of our ranchers are against U.S. policies now is the sheer number of people crossing their land and the damage they are doing,” says Carlos Montano, pastor of First Presbyterian Church in Douglas, Ariz. “There are broken fences—losing horses and cattle. They have a real problem there.”

Recently, Montano got a call from one of his congregation members who lives on a ranch. She told him a large number of people were working their way across the border, through her land—and they were hungry and thirsty.

“I gave them something to drink” she said, “and sent them on their way.”

“But then I called Border Patrol,” she confessed.

Montano says the congregation is living in the tension between “what is theory” and “what is practice.”

In 2006, when First Church was asked to be a sanctuary congregation—to offer protection to migrants on the move—14 members voted yes, 13 no.

A former teacher, Ceaser Gonzales of the U.S. Border Patrol in Douglas, says he made the career change in part to have “a greater influence” on children.

He says he speaks often to students in local schools, warning them about the dangers of drug cartels. Numerous letters from students are displayed on the walls of the Border Patrol station, saying things like “Thank you for making me realize how dangerous drugs are.”

Recently Gonzales talked to a juvenile who had tried to smuggle drugs across the U.S. border.

“He’d gotten beat up pretty good by the cartel before he tried,” says Gonzales.

“They gave him extra cash so he could help out his family. When it was payback time to deliver drugs, he refused. The cartel used fists—made him do it.”

“Are kids being exploited?” Gonzales asks. “Yes, but not all of them. Some of them are addicted; others simply like the rush. I talk to the kids at school about these issues a lot.”

At CAME, we talk to a man from Chihuahua, which is about 230 miles south of El Paso, Texas. He had been on the move, looking for work, migrating to the Mexican city of Juárez, near El Paso. 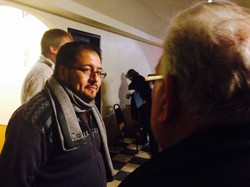 He says he thought about going to Tijuana, but friends told him it was almost as bad there. So he hitchhiked to the center they told him about, where Alberto Beto gave him a job.

Beto, the director of CAME, says he has tried to combat organized crime and all that comes with it—trafficking of drugs and humans, the exploitation of migrants and younger and younger minors—but that it can’t be controlled under the present government in Mexico.

“Presently, I do not believe in this government,” he says. “I do believe in change—that people can change—but it is overwhelmingly slow. My hope is that it happens in my time. I put my faith in God.”

Editor’s note: Next we’ll hear from migrants on the move and from ministry partners opening their doors to them, farther south, along the Mexico-Guatemala border.

Tags: border ministry, presbytery de cristo, voices from the border and beyond