There is a common perception that many United States immigrants—documented and undocumented—come to the U.S. chasing the “American Dream.” Ask some of the people who formed and maintain the Mexico-based coffee company Café Justo and they’ll tell you otherwise. 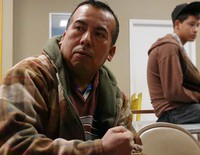 “To be able to go forward in life … to see our children grow,” whether in the U.S. or in Mexico, he said.

That’s why he and his cohorts at Café Justo are working to empower Mexican and other coffee growers to earn a fair wage. Formed in 2002 by members of Lily of the Valley Presbyterian Church in Agua Prieta, Café Justo is a network of coffee grower cooperatives that grow, roast, package, and ship their own coffee.

“We started with two workers here in Agua Prieta and now we have seven working here … and three more in the state of Chiapas” said Cifuentes, whose family has been growing coffee since they were indentured by Germans in the early 1800s.

ver the years Café Justo also has received support from the PC(USA)’s Self-Development of People program and Presbyterian Women.

“The idea was to share the experience that we were living as farmers, as an organization, with other communities in Mexico, but also outside of Mexico,” Cifuentes said, adding that Café Justo’s work extends into Nicaragua, Guatemala, and Haiti as well.

He said when they began Café Justo many families were leaving their communities and heading for the United States. “Now, with what Café Justo is doing, we’ve seen the return of some of those families.”

“We at Café Justo have adopted a vision, and the vision is to reduce the percentage of migration of farmers to the United States,” Cifuentes said. “We think that this is the best way, and helps families be able to stay in their place of origin.”

Café Justo’s Carmina Sanchez said in the past when there wasn’t work she had thoughts of going to the U.S., but she’s very content now working with the coffee co-op. “That possibility of crossing into the United States has gone from my mind.”

For consumers of Café Justo coffee, “each time you drink a cup of coffee have in your mind that you are helping a family,” Sanchez said. “You can be sure you are helping those families remain together, and they don’t have to separate.”