Home News Along the border 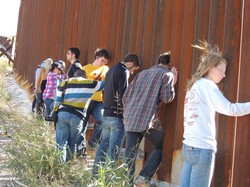 Each year, Young Adult Volunteers take a journey that changes their perspective on life in Mexico and immigration issues. They take a trip to the border of Mexico and the United States and meet those whose lives are divided by walls, policy and economics.

The group goes on the trip under the behest of Frontero de Cristo (which is part of Presbyterian Border Region Outreach) and BorderLinks, a Tucson-based organization that takes volunteers on trips to meet those most affected by border-related policies. Delegation participants meet with a wide spectrum of people on both sides of the border with a stake in border policy and immigration enforcement, who also have very different views about immigration issues. They visit and pray at the wall separating the more populous parts of Mexico from the United States and refill water barrels for those crossing in the more deserted parts. They also visit a recovery center that handles drug and alcohol addiction in Mexico.

Brandon Wert, YAV site coordinator in Tucson, said is the third year for the trip. This year’s trip involved YAVs from Denver, but in the past, YAVs from Hollywood and San Antonio have taken the journey.

“Our delegations try to muddy the waters and get a broader picture by meeting with border patrol and farmers who are upset that there are immigrants crossing through their land, in addition to those who are living in Mexico who want to come to the U.S.,” Wert said. “We want to give a broader perspective than what a sound bite on the news offers. We want them to have a personal connection to the border.”

The volunteers come to understand issues that affect those living along the border.

“The purpose is to open up the awareness of immigration policy, which affects all of us in the states,” said Antonio Lucero, Denver YAV site coordinator.

The Denver YAV site has typically worked with an organization there that deals with many immigration issues, but this year, that organization did not have a YAV placed there. But the YAVs still wanted to go on the trip and learn about border-related issues, Lucero says. “The reality is that this is a humanitarian crisis, and we're called to love people,” Lucero says. “They were able to see that up-close and in an amazing way, and also how immigration policies affect all of us.”

Anne Schrock, a Young Adult Volunteer serving in Denver with her husband, Tyler Schrock, said the trip made border issues real to her. Growing up in Ohio, she didn’t see the effects of immigration issues or personally know immigrants. She feels that she’s bringing new perspective to her work as a YAV and to the ministry she’ll have after her YAV year is complete.

Anne regularly writes about her experiences as a YAV on her blog. Read her posts about the border trip, A Moment at the Wall and The Heartbeat of Immigration.

“I saw specific fingerprints on the wall bars of people who had crossed that night or the day before,” she said. “The most important thing to remember is that entire families are getting unfairly and inhumanly separated by these deportations. It was also made known to us how specifically Scripture speaks on this subject and how this subject fits into the greater banner of rights and justice for all people. As people originally from the farmlands of Ohio, we also realized how easy it is to ignore this subject since we’re not right at the border. It requires us to have ‘other eyes’ and take time to see how it does affect where we’re from and maybe the people we overlooked the first time.”

YAV applications are due Feb. 1 for both national and international sites. Apply here. If you’d like to support the YAV program with a contribution, you can do so here.