Flooding and drought leave families without food or homes 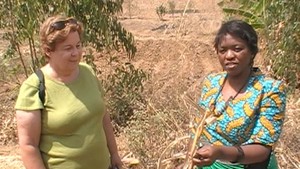 A group of Presbyterian Church officials recently returned from a trip to Malawi where they saw flood and drought ravaged communities and met people impacted by the crisis. Debbie Braaksma, area coordinator for Africa in World Mission, spoke with Presbyterian News Service about her visit and how people are being affected by the conditions.

Briefly describe the food insecurity crisis caused by flooding and drought in Malawi and tell us what you’ve seen.

I had the opportunity to travel with PC(USA) mission co-worker Nancy Collins and Church of Central Presbyterian (CCAP) throughout the three Malawian synods of the Church of Central Africa in September to experience the food insecurity crisis first hand. The situation is very desperate: close to two million people will not have the minimum food needed to sustain life before the next harvest in early March.

As the body of Christ we are called to stand with our sisters and brothers of the Church of Central Africa Presbyterian to support them as they seek to be the hands and feet of Jesus to respond to the hunger crisis unfolding in their midst. What we saw and experienced was very sobering. Blantyre Synod Health and Development Commission took us to visit a community affected first by the destructive rainstorms followed by drought.

The families only harvested between 0 – 20 percent of the maize and cowpeas that they would have obtained in a good year. Many were still living in tents. We visited a grandmother who was taking care of her two orphaned grandchildren. She had no food in the house to feed the children who showed signs of serious malnutrition—they were very small for their age. Now is the time for Presbyterians to respond by giving sacrificially to prevent a large scale loss of life in Malawi.

Tell us about World Food Day, October 16, which the PC(USA) has designated as a Day of Prayer and Fasting for the people of Malawi.

On October 16 we are calling all Presbyterians to set aside time to fast and pray for the people of Malawi as they face this time of an escalating hunger crisis. Pray for the most vulnerable—children, pregnant/lactating mothers, the elderly and those with health concerns and disabilities—as they are less able to withstand prolonged periods of inadequate food, parents as they struggle to obtain sustenance for their children, pastors as they minister to congregations with heavy hearts, for CCAP hospitals and development departments to have the resources, wisdom and strength to respond to the need, for PC(USA) members to show sacrificial generosity to help meet this need, and for the international community and government of Malawi to effectively respond to the situation.

What is expected of individuals, congregations and Presbyteries on the Day of Action for Malawi, Sunday, Oct. 18?

We are encouraging PC(USA) congregations, with the support of our presbyteries, to collect a special offering on Sunday October 18 to be sent to Presbyterian Disaster Assistance. We encourage generous giving by congregations and individuals to support the Presbyterian Disaster Assistance assisted response of our partners as they assess and register affected communities and provide food items such as maize meal, beans and cooking oil, with special attention given to vulnerable groups such as pregnant women, children under five, people with disabilities and the chronically ill.

How are global partners on the ground in Malawi meeting needs?

The Church of Central Africa Presbyterian is joining us in our Day of Prayer and Fasting on October 16 and Day of Action on October 18. Nkhoma Hospital and the development departments of the CCAP Livingstonia and Blantyre Synods are already assisting those affected by the hunger crisis as they do work in agriculture and food security but their efforts need to be multiplied manyfold in order to prevent loss of life as the crisis deepens between now and the end of February.