Home News The ripple effect of the Presbyterian Youth Triennium

The ripple effect of the Presbyterian Youth Triennium

No longer in despair, Triennium alum reaches youth who are bullied and feel alone 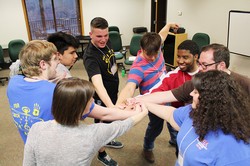 Rogers (one smiling – center right in photo) enjoying a team building moment with other worship/production members at a planning meeting in March, for the 2016 Presbyterian Youth Triennium. —Andrew Yeager-Buckley

Twenty-five year old Calvin Rogers divides his life into two categories, before Presbyterian Youth Triennium and after. “I plan to go to every Triennium until I die,” he says.

As a 16 year old, before triennium, Rogers was in emotional despair. Raised by strict parents who instilled moral values in him, he was a student who stood out from the crowd in high school. He was respectful and obedient toward teachers. He sat alone at an empty table during lunch. He was constantly picked on—bullied verbally.

“Imagine walking into a gymnasium with a thousand people at a basketball game, all laughing at you,” say Rogers. “Just because you’re wearing a pair of shoes and jacket that were bought by your dad, that weren’t very popular at the time.”

The person leading the charge in making fun of Rogers was a member of the church he attended in Huntsville, Ala. “I was devastated,” he says. “I was doing what my parents said, going to church, the youth group, yet they were still treating me the same way. There was no place that I fit in.”

When Rogers went to his Cumberland Presbyterian Youth Conference in 2006, the 300 youth there treated him differently than the kids back home. They saved seats for him. They sat next to him during lunch. They gave him non-stop hugs. They weren’t as strict. They chose him to be on the planning team for the upcoming Presbyterian Youth Triennium in 2007.

“They began to show me that my God-box was small,” he says. “It was like the beginning of a 180 [degree] turnaround. Unfortunately when I got back home, the kids at home treated me the same way they had before.”

But something had started to shift for Rogers. He had made many friends and knew there was community outside the narrow, small-minds maligning him in Huntsville. Reminiscing of memories of the conference, and looking ahead to what he might experience at this bigger event, helped him survive the taunting.

“That first Triennium took it to a whole new level,” he says. “Getting 700 hugs a day, the high fives, the music, the worship. The whole time I was like, ‘I can’t wait for eternity if this is what heaven is going to be like.’”

When he got home, after Triennium, people noticed something different about him. His dad, Calvin Rogers, Sr. asked, “What happened to you?” The kids at high school noticed it too—he carried himself with a different mindset. “Triennium was like a confirmation to me,” says Rogers. “It got me excited about my relationship with God. It gave a passion to work for others, so they could have the same experience I had.”

Toward the end of high school, Rogers got an unexpected gift from some of his peers. “They told me they were sorry for making fun of me,” he says, “That one guy in particular, who started it all, was in that crowd. It was his way of asking for my forgiveness.”

Upon graduation, Rogers used the students’ gestures as motivation to start his own youth conference. He wanted to teach as many as kids as possible what he had learned at Triennium.

“Matthew 5:16 says, ‘Let your light shine, so they will give glory to your father in heaven,’” he says. “That’s want happened, when that young man who had made fun of me approached me before graduation saying, ‘even though I did what I did, I appreciate you, I’d like to come to your Bible Study.’”

A year later, in 2010, Rogers presided over the first Christians Assisting Responding Enabling and Serving (C.A.R.E.S.) Back to School Conference in Huntsville. Fourteen churches, the Cumberland Presbyterian Church, and ecumenical partners helped make it happen. That first year more than 700 kids came to the conference and they continued to come every year as Rogers got more comfortable telling them about his experiences of being bullied and in despair. “Kids would come up to me in tears afterwards,” says Rogers. “Thanking me for giving them the knowledge that they were not alone.”

Rogers was president over the conference until 2014 when he passed the torch to others so he could move to Nashville, to pursue a music career. He’s now produced his first album “One God, One Cross, One Salvation.”

“Through Triennium God showed me this bigger picture,” he says, “which led to incredible joy. It’s where I began to learn how to experience God in a way that is exciting and awesome, appealing to youth and all age groups. It’s kind of like living heaven on earth, when we are together worshiping God.”

Rogers is on the 2016 Presbyterian Youth Triennium worship/production team, which will be held at Purdue University, July 19-23. In 2013 he served as small group leader at Triennium, and in 2010 he was on the work crew.