IPMN reflects on progress and prepares for new challenges 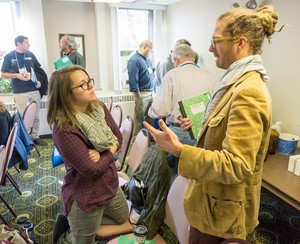 Meeting in Chicago this week, the Israel/Palestine Mission Network (IPMN) of the Presbyterian Church (U.S.A.) is setting goals for its continued work in the Middle East. Gathering at the Cenacle Conference and Retreat Center Oct. 29–31, 2015, the group is worshiping, learning and connecting across issues surrounding justice in Israel and Palestine.

As the only mandated mission network of the PC(USA) General Assembly, the group’s primary work, since its inception in 2004, has been to inform the denomination on justice issues identified by the Assembly. Many of the 90+ participants have traveled to Israel and Palestine in recent years and bring their first-hand experiences to the group.

Opening worship focused on Ezekiel 13:1–16, in which Ezekiel decries false prophets as “whitewashed walls”—as symbols of those who hope for peace without addressing the root cause of justice. Four speakers gave reflections on the passage, each using their experiences in Israel and Palestine as a backdrop to the current situation in the region.

“I went from being the oppressor to understanding the oppressor,” he said of his transformation out of apartheid racist attitudes. “Our path forward is to do justice and peace. I urge us to dig deep to see the effects of racism and to name it as a sin and abomination to God.”

“The oppression of communities of color and of people in Israel/Palestine is the reason we continue to pursue justice,” said the Rev. Kristin Riegel, associate pastor at Second Presbyterian Church in Kansas City, Mo. 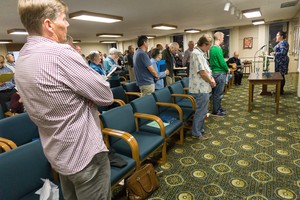 Reflections on recent trips to the region included those of Dr. Bob Ross, associate professor of global cultural studies at Point Park University in Pittsburgh, Penn. He recently concluded a trip to Israel and Palestine that included a brief visit to the Gaza Strip where he toured hospitals.

“Every single person in Gaza is suffering from PTSD,” said Ross of the after effects of the intensive Israeli bombing of the area in July and August 2014. “So many people just want to leave for Europe or the U.S.”

Former Middle East World Mission area coordinator for the PC(USA) currently working in Bethlehem, the Rev. Dr. Victor Makari, reminded the group of its legacy and thanked the members for their work.

“I remember when most of the work [of IPMN] was internal and just trying to get the General Assembly to understand the justice issues,” he said. “But now we have so many connections and partnerships, inside and outside of the PC(USA), it’s wonderful to see where the work is going.”

IPMN also discussed organizational details, electing members of its steering committee to another year of work and reporting that a $70,000 fundraising goal for 2015 had been met. Funds support advocacy, travel grants, program grants and mission co-worker Kate Taber. The group set a $72,000 annual fundraising goal for 2016 accompanied by the theme “Live into Hope.”

“Our annual gathering is a time to reconnect us as a network,” said the Rev. Dr. Jeff DeYoe, IPMN moderator and pastor at Covenant Presbyterian Church in Fort Myers, Fla. “We have a time to review the work we’ve done and look forward to what’s next.”

“We want to support all the overtures, actions and initiatives [to the General Assembly] that affirm justice for Palestinians,” he said of the educational goals of the group. “We stand for peace—for Israel, yes, but it can’t begin without justice for Palestine.”

The 221st General Assembly of the PC(USA) in 2014 narrowly approved a measure recommending that the Board of Pensions, the Foundation, and its members divest from three corporations whose products it believes contribute to the Israeli occupation of Palestine. The measure asserts products made by these companies—Caterpillar, Hewlett-Packard, and Motorola Solutions—are used by the Israeli government in the occupied territories and are not in compliance with the General Assembly’s policy on socially responsible investing.

In calling for divestment from these three companies, the General Assembly also reaffirmed Israel’s right to exist as a sovereign nation within secure and internationally recognized borders in accordance with the United Nations resolutions in addition to a continued commitment to interfaith dialog with Jewish, Muslim and Palestinian Christians.

Several groups continue to advocate for the PC(USA) to repeal the boycott measure, including Presbyterians for Middle East Peace, urging the use of tactics other than boycott, divestment and sanctions as the best means to bring about peace in the region.

The 2015 IPMN gathering continues Friday and Saturday with presentations by Omar Barghouti; workshops on liturgical language, advocacy strategies and a child welfare campaign; devotions; a business session and closing worship.