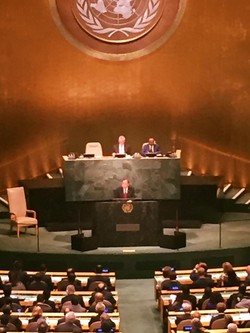 For nearly three-quarters of a century, the United Nations has provided member states an opportunity to make significant changes in the lives of individuals across the world. What began on October 24, 1945, continues to this day, and the Presbyterian Church has been present from the beginning.

Two years earlier, the 155th General Assembly of the Presbyterian Church in the United States stressed the importance of an international community that would “preserve peace, maintain international law and provide adaptations to changing conditions.” Shortly before the UN charter was finalized, the moderator of the General Assembly sent a telegram to churches, calling for prayer, emphasizing the need for an international organization to work for peace.

“The church holds special consultative status through the UN Economic and Social Council, allowing our voice to be heard by a global audience and to contribute to its agenda by attending conferences, making oral and written statements and taking part in advocacy and networking,” said the Rev. Mark Koenig, director of the Presbyterian Ministry at the UN. “Today, the ministry has two primary tasks: to inspire and equip Presbyterians for global discipleship following Jesus Christ and to advocate for peace and justice in Christ’s name based on the policies of the General Assembly of the Presbyterian Church (U.S.A.) within the UN community.”

Over the years, a number of church leaders began their work in advocacy through an internship with the Presbyterian Ministry at the UN. Laura Cheifetz, executive director of church and public relations for the Presbyterian Publishing Corporation, served as an intern with the UN ministry in 2000-01. During her time with the ministry she developed a resource packet for PC(USA) congregations interested in the UN’s work and served as a delegate to the UN World Conference against Racism, Racial Discrimination, Xenophobia and Related Intolerance.

“Those engaged in the work for justice form a very broad coalition, and every ember can contribute something unique and helpful,” said Cheifetz. “Working with the international community has helped me listen a bit more carefully and given me a better understanding of how worldview and language can differ widely between Christians from different contexts.” 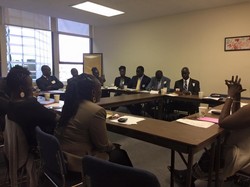 Representatives of South Sudanese communities meet with staff at the Presbyterian Ministry at the United Nations. —Ryan Smith

Ian Alexander, general secretary of the World Mission Council for the Church of Scotland, served as an intern from 1992 to 1995. He followed social development issues, the work of UNICEF and Middle East issues, and co-led a delegation to Sudan to offer solidarity to the Christian community there.

“My experience taught me the importance of seeing the world holistically, that everyone has something to share and learn. Working at the local level is key to gain traction at the national and international levels,” said Alexander. “It is important for congregations to engage and to grow in awareness of how every church member can be a catalyst for change in the world. Politicians respond to local communities, and committed individuals and churches can effect change.”

The United Nations faces a number of challenges around the world. A recent Gallup poll report observed, “Many international crises today are not the traditional country-against-country conflicts that typified the wars that preceded the UN’s founding action, but actions by groups that operate across borders and that have no specific national identity. This may make it more difficult for the UN to actively intervene.”

“The challenges facing the international community have shifted, and the UN is seeking new ways to respond,” said Ryan Smith, Presbyterian representative to the United Nations. “It is the one global roundtable where the governments of the world can come to try and address issues. That doesn’t mean it is always a clean or nice process.”

To find out more about the Presbyterian Ministry at the United Nations, to schedule a seminar or to donate to the ministry, go to pcusa.org/un.

Contributions enable the Presbyterian Ministry at the United Nations to inspire, equip and connect Presbyterians in ministry as faithful disciples of Jesus in the global community and witness to the nations of the world, based on General Assembly policy that “God sends the church in the power of the Holy Spirit to share with Christ in establishing God’s just, peaceable and loving rule in the world” (Book of Order, G-3.0300).