Church leaders gather to reflect on group’s legacy and impact

For three days this summer, more than 150 women and men from across the Presbyterian Church (U.S.A.) came together to reflect on and celebrate the rich history of the Catawba Synod and the impact it has had on the life of the church.

“I’m not sure how many realize the powerful impact the Catawba has had on the church and society,” said Catrelia Hunter, a member of the planning team for the gathering. “The purpose of this event was to really recognize the work of the Catawba Synod that existed before the reunion [of the northern and southern branches of the Presbyterian church that became the PC(USA).] The Catawba Unit was heavily involved in education and advocacy, and they were heavily involved with economic and civic engagement. Their contributions still resonate with the church today and are worth celebrating and remembering.”

The Catawba Synod was organized in 1866, just after the end of the Civil War, when missionaries from the North saw the newly liberated African Americans as objects of mission and began to evangelize them. The missionaries organized them into congregations, presbyteries that were related to the northern Presbyterian denomination—formerly known as the United Presbyterian Church in the United States of America. In 1887, the General Assembly moved to formally create a new synod, Catawba, which would be made up of the presbyteries of Catawba, Cape Fear and Yadkin.

At the time, African American presbytery members, even though they were organized into presbyteries and synods, were not able to participate meaningfully in the decision-making that affected their constituencies. However, that did not stop the synod from creating meaningful change and having a lasting impact on the life of the church. Since it’s inception, Catawba has had strong ties to education and institutional development, working to establish schools like Johnson C. Smith and Barber Scotia, which were founded to prepare men, women and young people for leadership. Catawba also boasted strong men and women’s ministries that paved the way for dramatic civil and social change. 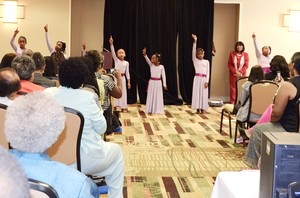 Church Women United was instrumental in pioneering an organization for women employed in domestic services. Three churchwomen—Mrs. Sigmon, Mrs. Paul Beatty and Mrs. Vera Swann—met with approximately 40 women employed in domestic service and set goals for an organization of domestic workers. Objectives included a minimum starting wage, overtime pay for anything over eight hours of work per day, sick leave, paid vacation and social security coverage, thus forming what is believed to be the first union of domestic workers in the country, which forever changed the scope of the workforce.

“We’re so grateful for all who came together this summer to celebrate the deep history of Catawba, and we were so fortunate to have leadership from across the church attend,” said Hunter. “Those who attended took away a real sense of pride and appreciation for what the Catawba Synod meant for the growth and development of African American congregations in the church. I think they also took away some very pertinent information that will benefit their congregations in the future. I believe Catawba truly helped strengthen the congregations who were part of it.”