Home News PC(USA) young adults get down on the farm

PC(USA) young adults get down on the farm 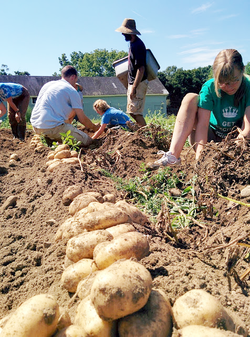 Keiling—one of five young adults from Gates Presbyterian Church in Rochester, N.Y., ranging in age from 19 through their early 30s—took a break from his psychology studies at Monroe Community College to make the five-hour drive to Stony Point in late August, where he not only helped to harvest potatoes, tomatoes and peppers, but also watched films that examine the current food systems in the U.S., participated in interactive learning activities, daily prayer and much more.

“It was a cool idea,” said Keiling, “a cool thing to do. We ate the food we helped to collect, made our own salsa, and viewed a film about the farm workers in [Immokalee] Florida. It really opened my eyes to see how poorly farm workers are treated and made me want to do more about it.”

Food Justice and Sustainable Agriculture Retreats at Stony Point are designed for any group of people interested in learning about how food is grown and who want to participate in the food-growing process. The retreats reflect the conference center’s strong commitment to food justice and sustainable agriculture.

“I always wanted to have a reason to take a group to Stony Point, but it had to be a program that people would be willing to take off work for,” said the Rev. Katie Styrt, stated supply associate pastor at Gates.

Styrt, a former Young Adult Volunteer and a participant in the Synod of the Northeast’s Early Ministry Institute, had been to Stony Point often. “When we heard about their food justice retreats,” she said, “it seemed like a good compromise. And Stony Point was great to let us do it over a long weekend.” 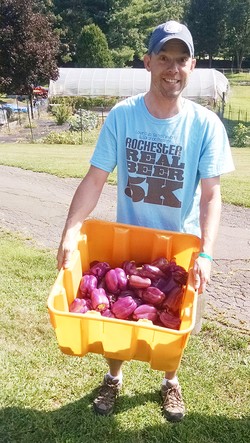 Another benefit of the retreat was the group’s interactions with Stony Point’s Community of Living Traditions, a multifaith residency program.

“Our group really loved that Stony Point has different gardeners in residence who are of different faiths,” said Styrt. “We got the chance to spend time with people who are Muslim and Jewish and learn with them. We did a faith sharing activity together, which is something that our group really enjoyed.”

The curriculum for the food justice retreats was written by Will Summers, Stony Point’s farmer since March 2013.

Summers, a 2003 graduate of the University of Texas at Austin with a degree in communications and film production, chose not to work in the media industry after he discovered a passion for farming.

While visiting with an aunt in Australia, he became a volunteer with WWOOF, World Wide Opportunities on Organic Farms. Then, upon returning to the U.S., Summers started volunteering on a farm in Austin, and later apprenticed on two different farms in Texas, including work in Waco for World Hunger Relief, a Christian organization committed to the alleviation of hunger around the world. There he discovered the intimate connection between farming and faith.

“Nothing animated me other than working on a farm,” Summers said.

Giving individuals like David Keiling and groups “a sense of what it is to work on an organic farm” is an integral part of Summers’s, and Stony Point’s, mission and vision.

“For David, the food justice retreat was especially transformative, because a month before, he traveled with a group of us to Guatemala,” said the Rev. Melissa Lynn DeRosia, pastor of the Gates Church. “The purpose of the trip was to hear the stories and learn from the families who are transforming their communities through sustainable agricultural practices. The connection between the relationships in Guatemala and the ministry at Stony Point was phenomenal.”

So much so, that Gates is now moving forward on a community garden.

“Stony Point is such a wonderful gem of our denomination,” DeRosia said. “It’s one of those places where we can point to and say, ‘This is the church living out who we say God is calling us to be.’”