In the midst of horrifying violence and the ravages of jihadi militant groups, the people of Syria and Iraq struggle to hold onto hope. 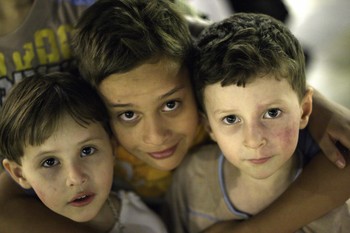 Children at the Umayyad Mosque in Aleppo, Syria, much of it destroyed during the fighting in 2013

The following article was originally printed in the September/October 2015 issue, "Our Hurting World," of Presbyterians Today. Presbyterian News Service is sharing it to lend context to the recent attacks in Paris and Beirut.

Sometimes, I wake up in the middle of the night, thinking about them. About what they, the survivors of a brutal war in Syria, said when I first met them in 2014. “Tell everyone you know to stand with us against those who are profiting off war,” said one person. “We’d forgotten how to laugh,” said another. And the one that still mars my sleep: “I no longer allow myself to cry.”

Now, more than a year later, the death toll in Syria has risen beyond 200,000, more than half of them civilians, and the Syrian Observatory for Human Rights says the real number is likely much higher. The United Nations estimates that 7.6 million people have been displaced from their homes, forcing another 3.9 million to flee the country altogether. More than half of those refugees are children.

When I was there in 2014, the Islamic State (IS), also known as ISIS or ISIL, and other jihadi militant groups had just begun to take over large swaths of the country. Since then, IS—widely condemned by much of the Muslim world—has implemented a strict and ahistorical interpretation of Sharia law so extreme that even al-Qaida leader Ayman al-Zawahiri has disavowed IS. Public beheadings, crucifixions, and mass shootings have become common. Christians, Yazidis (who subscribe to a Kurdish form of dualism linked to Zoroastrianism), and Shia Muslims have been especially targeted for brutality.

So, today, new messages keep me up at night: “The fanatics are growing in number and power,” “We are losing it,” and “There’s nothing left to say; I’m out of words.”

I met them—my new friends from Lebanon and Syria—in March 2014 at the Near East School of Theology (NEST) in Beirut. Rob Bullock, the Presbyterian Foundation’s vice president for marketing and communications, and I were there to lead a communications seminar.

For one week, we worked with Syrian pastors, church leaders, professionals, and theology and medical students.

We were there to help them shape their stories, both for speaking with Presbyterian congregations in the United States and for communicating to a Western audience through social media channels. Together, we wanted to tell stories that weren’t being included in mainstream media, stories that would alter the narrative of what’s happening and break through the passivity of so many Westerners.

But as we listened to their stories, gradually we began to realize how much they were shaping us.

Their struggles of course struck a deep chord with us, but it was their faith that changed us.

We listened with amusement as these Lebanese and Syrian Christians, whose history goes back two millennia, recounted talking with US congregations and getting the question “Who converted you?”

This was always jarring to them, they said, for they were from the land where Paul met Jesus on the Damascus road. “Who converted you?” they wanted to retort.

Before war—winds of the Arab Spring

Amgad Beblawi, World Mission’s coordinator for the Middle East, says this violence didn’t have to happen. He remembers when the peaceful protests for democracy and freedom began in Syria in March 2011 with the Arab Spring. The Syrian government reacted harshly, he says, “with heavy-handed responses” to the protests in several cities. That response included opening fire on peaceful demonstrations.

Watching this closely, Beblawi says, were many Islamic militants and foreign fighters around the world. One of them, IS, traces its roots back to al-Qaida as well as the extremist organizations that emerged during the US invasion of Iraq in 2003. After a long period of being weakened by US troops and Sahwa (Awakening) councils of Sunni tribesmen who rejected its brutality, the Islamic State in Iraq (as it was called at the time) experienced a resurgence in 2011 and decided to expand its focus to include Syria, sending most of its fighters across the border into Syria. The organization then took on a new name, the Islamic State of Iraq and Syria. Militants from about 80 other countries also made their way into Syria.

Within a few weeks, what had started as a peaceful protest by unarmed civilians was hijacked by militant jihadists from across the world. Eventually, the leadership of IS managed to unify most of the militants under its wings. In June 2014, after conquering the northern Iraqi city of Mosul and advancing toward Baghdad, IS declared a new caliphate and changed its name to Islamic State.

By then, US troops had withdrawn from Iraq, leaving behind a week Iraqi government and military.

“Long after the peaceful demonstrations ended, and the Arab Spring in Syria was hijacked by militants, the US Congress kept insisting [that] the Syrian government was fighting a brutal war against peaceful demonstrators—moderates—ignoring the fact that the movement had been hijacked,” Beblawi says. Click here to learn more about the rise of IS.

A tale of two pastors

In March 2014, I came face to face with the people living in the midst of this violent turmoil.

Over a shared meal, Syrian pastors Firas Farah and Saoud Bahi offered a funny story. Laughter erupted with the punch line—laughter that gradually faded away into silence.

“Our new friends, thank you for coming and listening,” Bahi said. “Until this moment, we hadn’t realized that we’d forgotten how to laugh.”

As pastors and graduates of NEST, Bahi and Farah are best friends. Both at the time were serving churches, under great duress, in northeastern Syria.

Bahi was in al-Hasakah, and Farah in al-Qamishli, a city bordering Turkey and close to Iraq.

The meal’s laughter couldn’t mask the sad knowledge that God was leading them in different directions.

Bahi was attempting to get out of Syria with his wife and children. Eventually they migrated, joining relatives in Sweden.

Even as danger was increasing, however, Farah was committed to staying.

Years of war were taking their toll. By the summer of 2014, nearly 75 percent of his congregation had migrated. Resources were thinning by the moment. But in the fall, when Farah learned that 1,500 Yazidi families—who had been driven from their homes in northern Iraq by IS militants—had crossed an unsecured border in Syria, he organized a team of Presbyterians to visit them.

At the tent city for the Yazidi refugees, Farah learned that they desperately needed a source of water. With assistance from the Outreach Foundation—a validated mission support group of the Presbyterian Mission Agency—the Presbyterian Church in al-Qamishli drilled a well for these families.

“When we saw their problems,” Farah told the Foundation, “we forgot our own.” 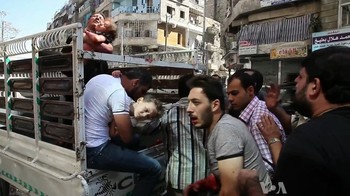 Farah told us of another moment he will never forget. He’d been on a bus earlier that year with his wife and children. They were traveling to Damascus to visit his wife’s parents.

Farah’s son had been on the verge of falling asleep in the seat behind him. Changing his mind, he went to sit on his dad’s lap. About that time a car pulled next to the bus. Leaning forward, Farah, who was helping his son go to sleep, noticed the man next to him shaking.

“Snipers, snipers!” the man shouted. “Go under the seat!”

The next thing Farah noticed was the wood board behind him. A bullet had gone behind his head and lodged there. Then he saw the man across from him. The bullet had struck him, and he was bleeding. “It could’ve been me,” Farah said. “My wife and I were praying, thanking God for saving our lives, even as we were rushing him to the hospital.”

Later that night they heard that the man died. “My son kept asking me, ‘Why did they have to kill that man?’ ” Farah said. “Tell the important people in your country that our children are living in great terror. They witness explosions, bloodshed, killings, and beheadings.”

The situation continues to deteriorate. In June, reports indicated IS had seized a district in al-Hasakah, where Bahi once lived. For now, the Syrian government still controls the main road linking the capital city with Farah’s town of al-Qamishli. 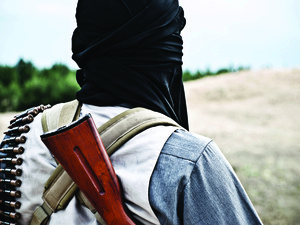 “They are creating their own kind of ‘world order,’ and it leaves little room for anyone who disagrees with their views,” says Elmarie Parker, Presbyterian World Mission’s regional liaison to Iraq, Syria, and Lebanon.

Calling it “heartrending to watch,” Parker tells the story of a Presbyterian church in Mosul.

In 2006, she says, the last elder of the Mosul congregation was kidnapped for ransom and then murdered. Parker knew the last remaining family of the congregation, the four sisters of the man killed. “They closed the church but began praying for that day when Presbyterians would worship there again,” she says.

Nearly a decade later, when IS gained complete control of the city, the sisters, along with the Christian communities that had called Mosul home since the first century, had to flee.

“The entire church community, everyone, as well as other religious groups not aligning with IS, is suffering, including the Sunnis, Shias, and Yazidis, who have suffered the most,” says Parker.

The Yazidis, for whom Farah helped dig water wells, are syncretistic, combing elements of various religious traditions, and are generally open toward other faiths.

“Because IS views them as devil worshipers, they have received worse treatment than Christians or even Shiites,” says Scott Parker, a mission coworker in Lebanon and Elmarie’s husband. “Their men are slaughtered on site.”

Recently, Parker was at a camp for Yazidi refugees. Hanging out with a bunch of kids, he thought to himself, “ ‘If I had girl, she’d be just like that,’ ” he says. “These were normal girls; others just like them have been beheaded or taken as sex slaves. These atrocities now have a very real face for me.” 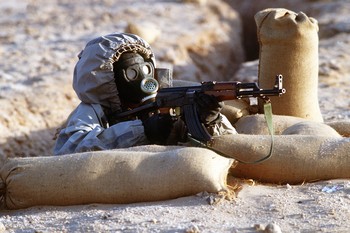 Beblawi points out that by 2005—just two years into the US invasion—there was only one Presbyterian pastor left in Iraq. He pastored churches in Kirkuk, Mosul, and Basrah, and two in Baghdad (one closed in 2006 due to violence in the city and threats to church members). Basrah, which had more than 1,000 Christian families in 2003, is down to roughly 100 families—a 90 percent loss due to emigration.

“We are a depressed nation,” says Gladys Abboud, referring to both Iraq and Syria. Abboud worked for the National Evangelical Synod of Syria and Lebanon before moving recently with her Syrian-born husband and son to Kitchener, Ontario. “[We have been] affected at the deepest level of [our] souls. After the war, new sickness and psychological disorders will be discovered.”

I asked Abboud what she would like to say to those of us in the United States. “Be grateful for all you have,” she wrote. “For life can be very harsh, and you never know when this can happen. We never imagined so much destruction and hatred could fill our land and country. When the so-called Arab Spring started, I had a discussion with my mother-in-law. How strong and self-sufficient Syria was. We talked about the economic stability, safety, and peace of mind most of us enjoyed.”

“We said, ‘It will never happen here.’ That was four years ago. We were mistaken; what happened was even worse.”

“Our sick region needs a miracle.”

Paul Seebeck is a communications strategist for the Presbyterian Mission Agency.